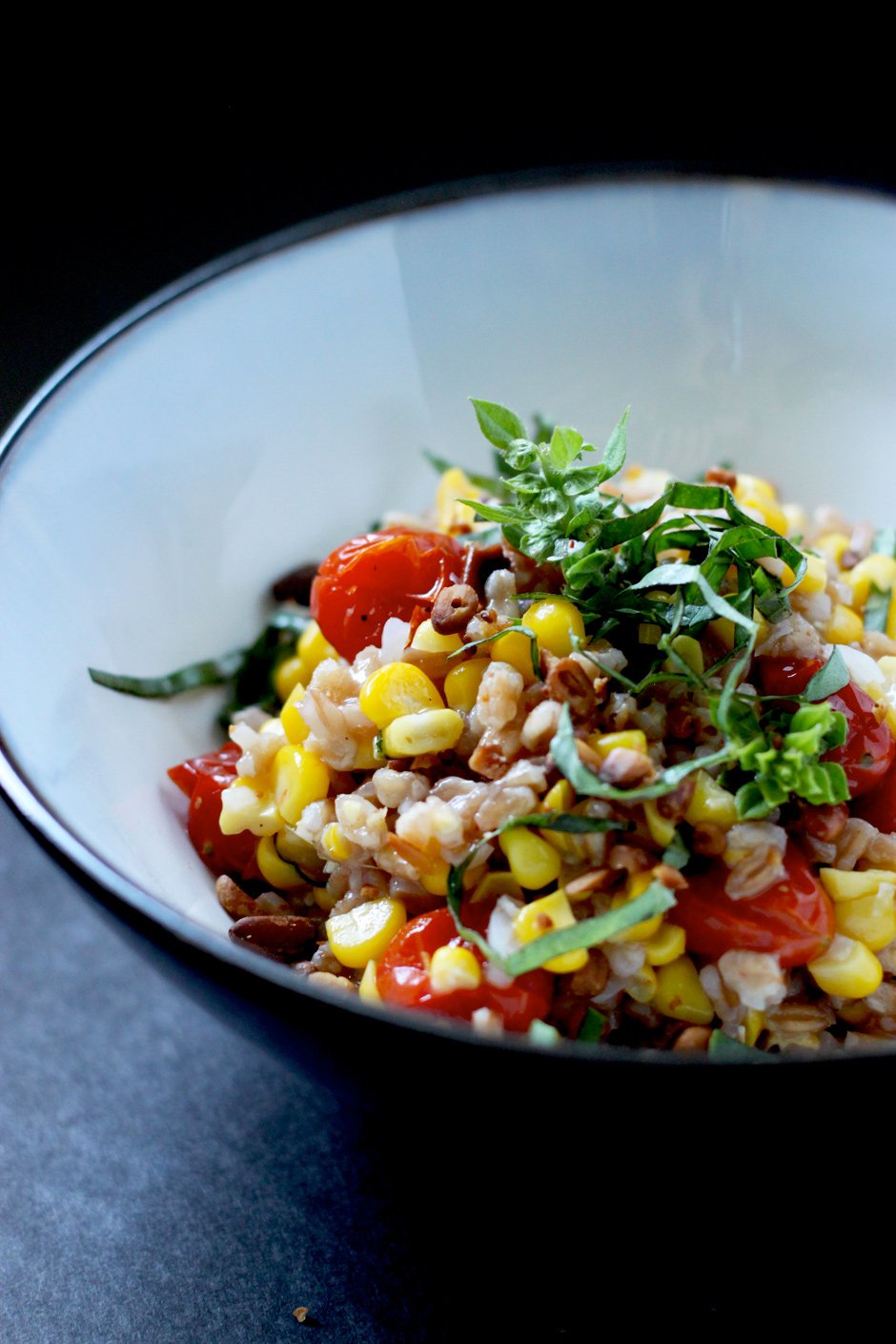 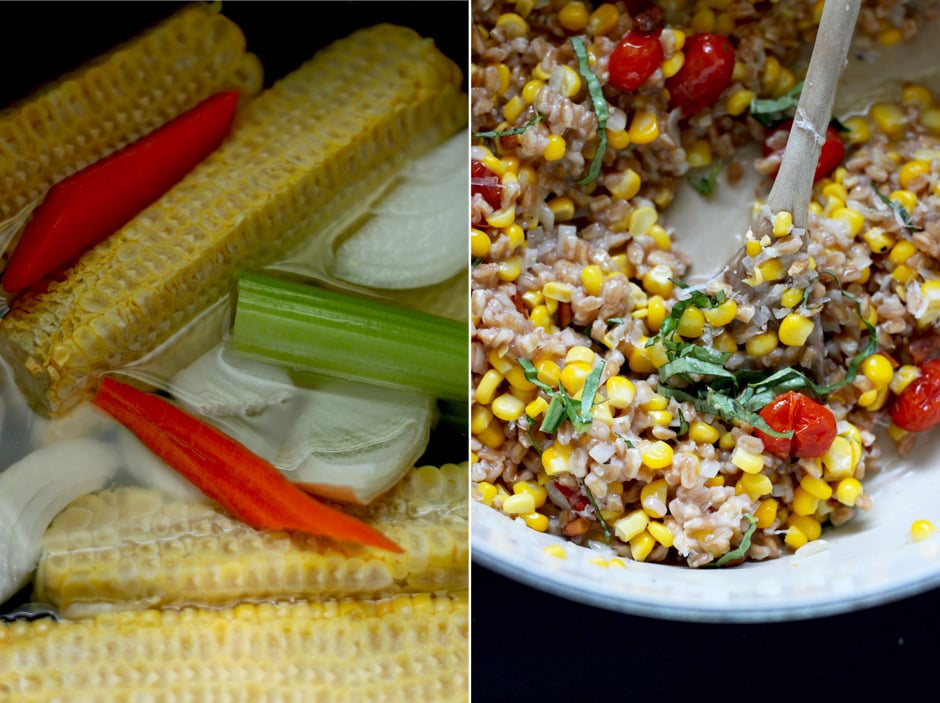 Summer isn’t over and I’m going to prove it to you. How? Over a healthy bowl of farro risotto with tons of sweet corn, juicy caramelized tomatoes and fresh herbs. Our garden is exploding with goodness right about now. Pumpkin and apples can just wait.

Much as I love the season of turning leaves, blushing summer fruits and full flavour veggies are at their peak in my little corner of southern Ontario. Time to get virtuous with the resources and do the right thing: eat it all. Pinterest is kind of exploding with pumpkin spice things and braises, hot toddies, pictures of cold mist washing over mountains, wool sweaters, ruggedly handsome dudes in puffer vests, ankle booties and the like. Resistance. Peaches. Iced tea. Summer. Forever.

I won’t deny the cool breeze floating around in the evenings though. This recipe is made for that coolness, that whisper of things to come. It’s a warm and hearty bowl-food kind of recipe that makes you feel good just knowing that it’s going to come about. There is toasty farro stirred in a risotto style with a bunch of summer veg, shallots, a heavy drizzle of white wine and the sweetest, most delicious thing ever: corn stock. Stock made from corn cobs. So simple. So game-changing.

September brings out the “clean it up, get resourceful, and move the hell on” side of me. It’s something fierce. I’ve been working a lot, so spending that precious leisure time in a cloud of clutter was making me somewhat grumpy. It was time to remedy that in a serious way. Along with getting all enterprising and such on those corn cobs, I’ve been on a bit of a clean-up tear.

There was a slight closet purging, major recycling efforts, a pantry consolidation (“Oh neat there’s farro in the back of this cupboard!“), a solemn promise to hold a yard sale (and an equally solemn promise to be more discerning on kitchen and book-related purchases) etc. How have I amassed so much stuff? It’s overwhelming, but I’ve been taking some giant steps, making it all happen and feeling way better. Room to breathe and move around. It feels good, friends. Like a shinier, sparklier, less hindered version of yourself emerging. All that and a bowl of farrotto. Summer can stick around a while longer as far as I’m concerned. 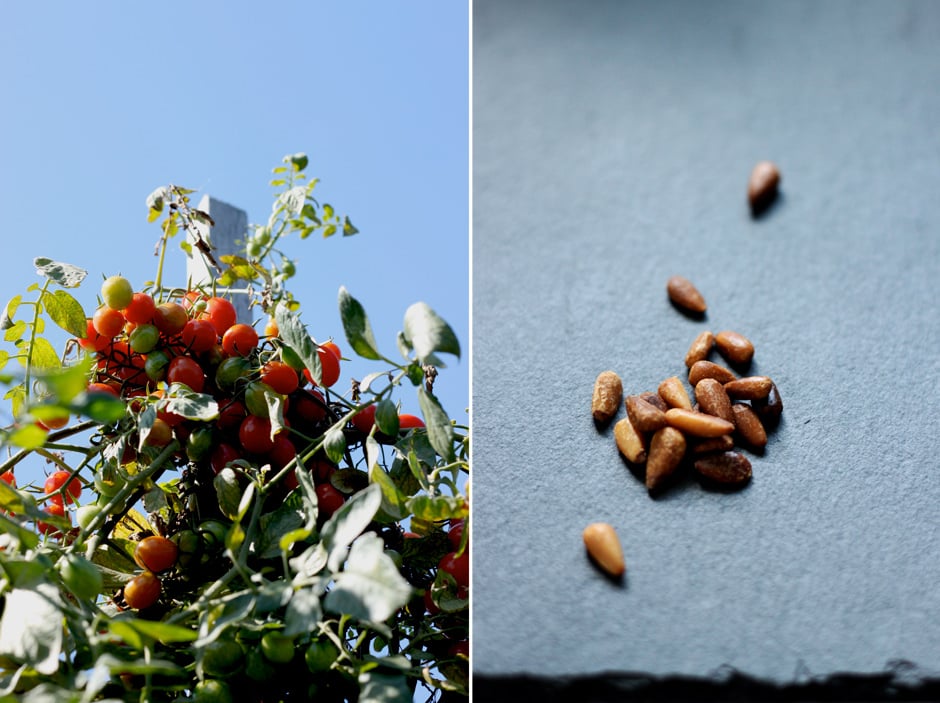 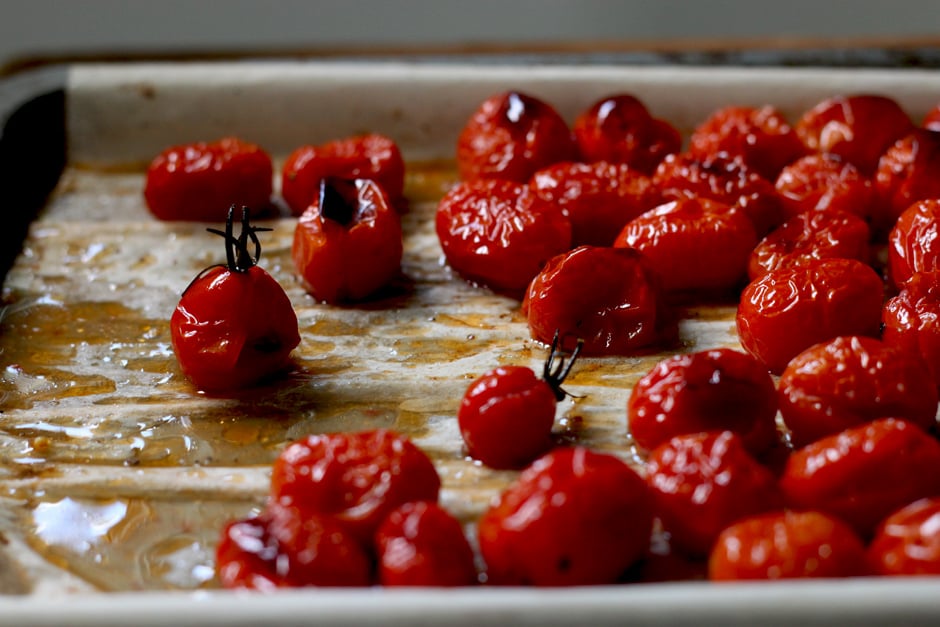 SWEET CORN & CARAMELIZED TOMATO FARROTTO
Print the recipe here!
SERVES: 4
NOTES: If you don’t want to wait for a homemade corn stock to come into fruition, using a pre-fab vegetable stock should yield some decent results. You could go for the traditional arborio rice if you have a gluten allergy too. Oh, and a pro tip: Have everything at the ready on the counter beside your stove once you’re about to start stirring it all up.

Preheat the oven to 400 degrees F.

Make the corn cob stock: place the cobs in a large pot. Add a few dices of celery, onion and carrot if you like. Pour 6 cups of water into the pot over the vegetables. Place pot on the stove and bring to a boil over medium high heat. Reduce heat and simmer for 20-30 minutes. Strain stock through a sieve. Return stock to the large pot. Keep warm. There should be about 4-5 cups-worth.

While stock is simmering, line a small baking sheet with parchment paper. Place whole grape tomatoes on the paper. Toss tomatoes with the 1 tsp of oil and some salt and pepper. Roast in the oven for 20 minutes, or until slightly browned and shriveled. Remove and set aside.

Drain and rinse the farro, trying to remove as much water as possible. Set aside. Start simmering the strained corn cob stock on a back burner.

Heat the 2 tbsp of oil in a large soup pot over medium heat. Add the diced shallot and minced thyme. Saute until the shallots are translucent and browning slightly. Add the drained farro. Stir it around until it’s thoroughly coated in oil and starting to smell toasty. Add the wine. It should bubble up quite a bit. Stir the farro around until most of the wine is absorbed.

Add a 1/2 cup of corn stock. Stir the grains around until most of the liquid is absorbed. Repeat this process with the stock until the farro is just about cooked. I added about 3 cups of stock (in 6 additions) before I got to this stage. When you bite into a kernel of farro, it should yield to the tooth, but still have a bit of chew.

Add the corn kernels and one more 1/2 cup of stock. Stir vigorously to activate the starch in the corn. Once most of the stock is absorbed and the mixture appears creamy. Add the roasted tomatoes, basil, pine nuts and pecorino (if using). Season with salt and pepper and stir gently to combine.

Serve hot with more chopped basil on top if you like. 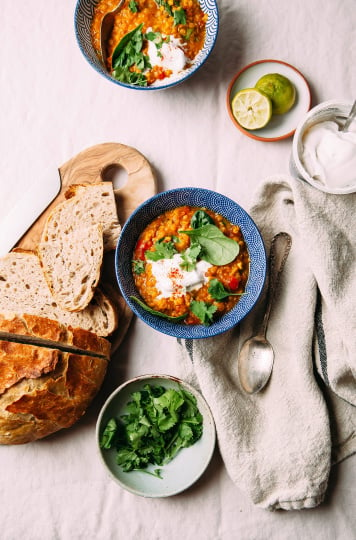 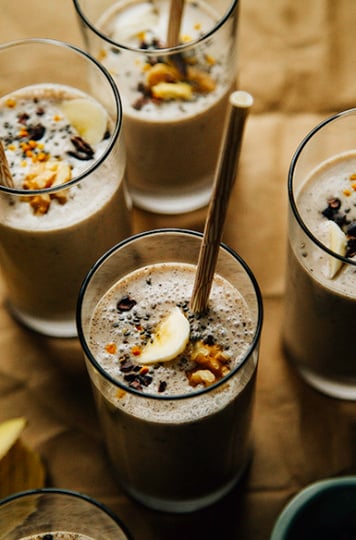 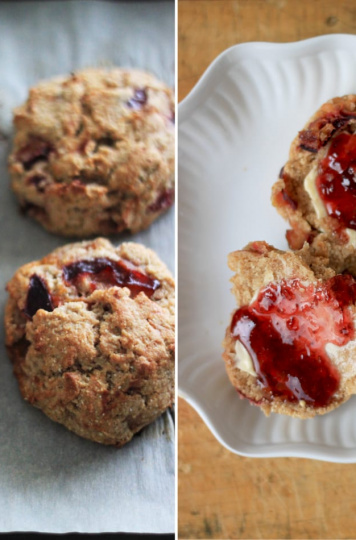