Saturday or Sunday lunch/brunch has historically been my least favourite shift to work in terms of service. It’s just way busy and if you try to have a shred of a social life on the weekend like a normal human being, you’re paying for it in some way as the day wears on. I’ve been parked behind a giant espresso machine for solid blocks of time hammering out lattes for fancy ladies. The day is a blur of flipping those tables over and over until the clock strikes 3. There are children and there are messes of ketchup. There are total, self-entitled douchebags that need coffee. Clatters, clangs, beeps, change clinks, sizzles + shouts. The fullest hours imaginable.

A couple years ago, I found myself on such a day catching a moment behind a vitrine all filled to the brim with pâté, pickles, cheeses and marinated items; my elbow supporting my chin and heavy gaze. Other hand firmly planted in the pocket of my faded navy blue apron. My boss came up behind me so silently and leaned up on the case as I did, looking out at the scene. After I made some throwaway comment on how crazy it had been all morning, he said something so great. He gestured out to the dining room and remarked “Isn’t it wonderful to look out and see everyone smiling and to get a sense that they’re all laughing together?” And it was actually nice. It made me feel better about my lack of sleep, not being able to have a leisurely  read + eat with my man, about those DB’s I mentioned earlier… I felt less like I was swept up in service and more like I was performing a necessary service for my community. I was part of the assembly that facilitated a weekly coming-together over something good to eat. Huge. People look forward to that time all week. Work became privilege.

Side note: I work in a fine establishment that only opens for dinners now, so this has become less of a thing. But! I appreciate languid breakfasts in and out of the home all the more now–for the happy chorus in a crowded dining room or the one, singular laugh of my handsome man. All of it a still new-feeling luxury for me.

So for those happy/lazy times at home, you would probably find me fixing up something like this. The quinoa in these provides crunchy textural contrast. It isn’t thrown in because of random “for your health!” kind of aspirations. They give the cakes heft and much visual interest. I toast it in cinnamon flecked coconut oil for lots of fragrance and use plenty of vanilla to warm up the largely almond meal-based batter. Cacao nibs give a wine-y chocolaty crunch and the bananas get sweet and caramelized on top of the cakes. A dollop of tangy yogurt and plenty of maple syrup finishes them off. Something wonderful to see us through to the end of winter, over some good reads and a pot of tea.

COCONUT, ALMOND & QUINOA BREAKFAST CAKES
Print the recipe here!
Inspired by True Food.
SERVES: 3-4
NOTES: I blend everything except the spelt flour, salt, sugar and leavening agents to really smooth out the almond flour. That’s an optional step. Also, making the quinoa up the night before would cut down on prep time considerably if you’re planning on maximal chill times on a Sunday or some such thing. If you eat eggs, you could certainly add a whisked one to the batter for some extra leavening power.

Cook the quinoa: in a small saucepan over medium heat, drop a 1/2 tbsp of the coconut oil. Once it’s fragrant add the pinch of cinnamon. Stir that around until it smells way good. Add the rinsed and drained quinoa and a pinch of salt. Stir it around in the oil a bit to toast. Add a scant cup of water to the pan. Bring the quinoa to a boil and simmer for about 15 minutes. You want the quinoa to be cooked, but kind of crunchy too. Drain off excess liquid and cool quinoa completely.

Add the lemon juice to the milk and set aside for 5 minutes to curdle/lump up.

In a medium bowl, combine the spelt flour, baking powder, baking soda, coconut sugar and sea salt. Stir to combine. Combine the almond meal, vanilla extract, remaining coconut oil and curdled milk in the blender. Flip it to high and blend until the mixture is very smooth, about a minute. Scrape this mixture into the bowl with the spelt flour etc. Gently fold it all together with a spatula until just combined. Add the cooled quinoa and fold it in until it’s evenly mixed.

Heat a large sauté pan or griddle over medium. Brush with melted coconut oil. Drop 1/4-1/3 cups of batter onto the pan. Spread the batter out a bit with a spatula or the bottom of the measuring cup. Press banana slices onto the top of the cakes and sprinkle with cacao nibs. Once bubbles start to form on top and the bottom is golden, flip them over. Continue to cook until bottom side is golden/dry. Repeat with remaining batter, keeping cooked cakes warm as you go along. 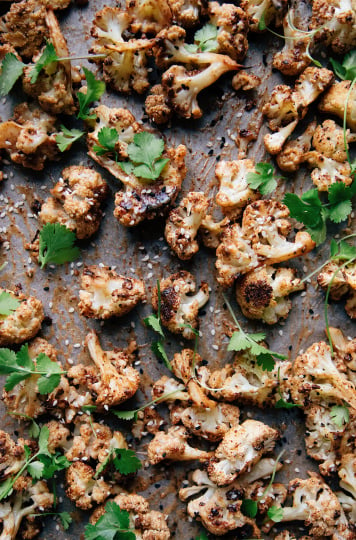 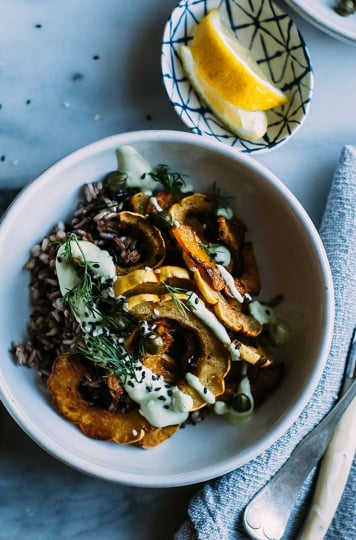 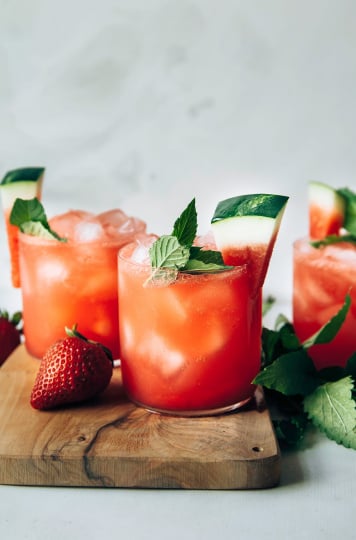