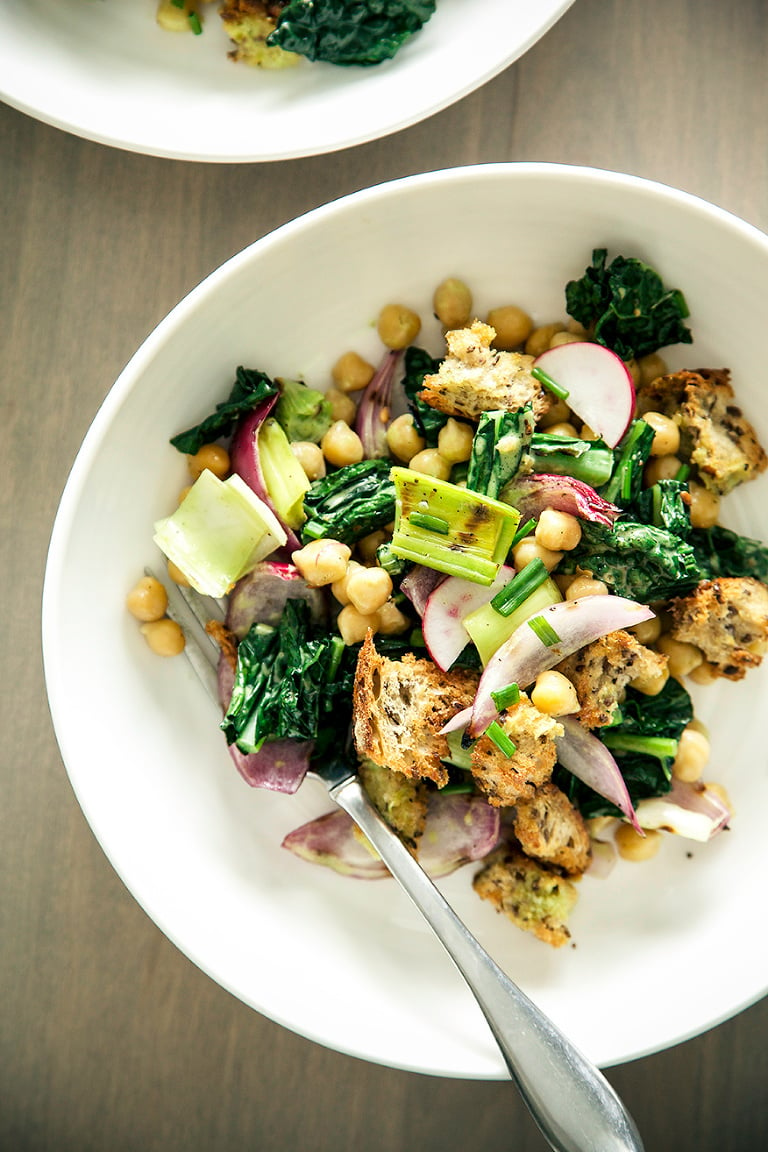 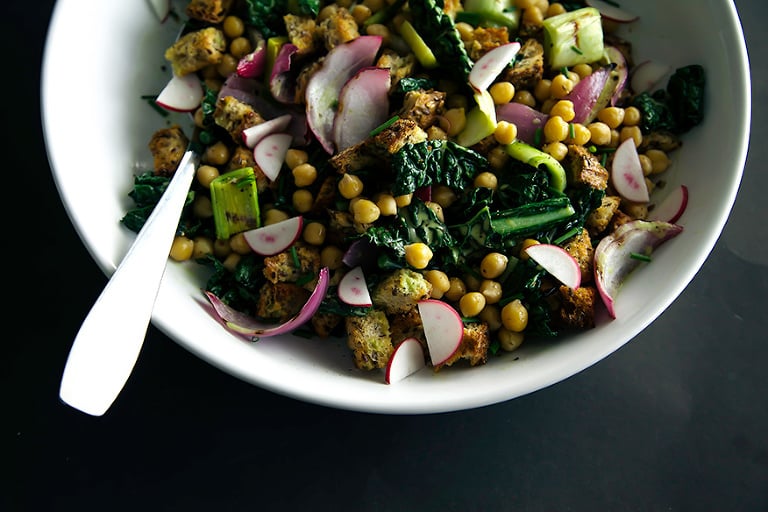 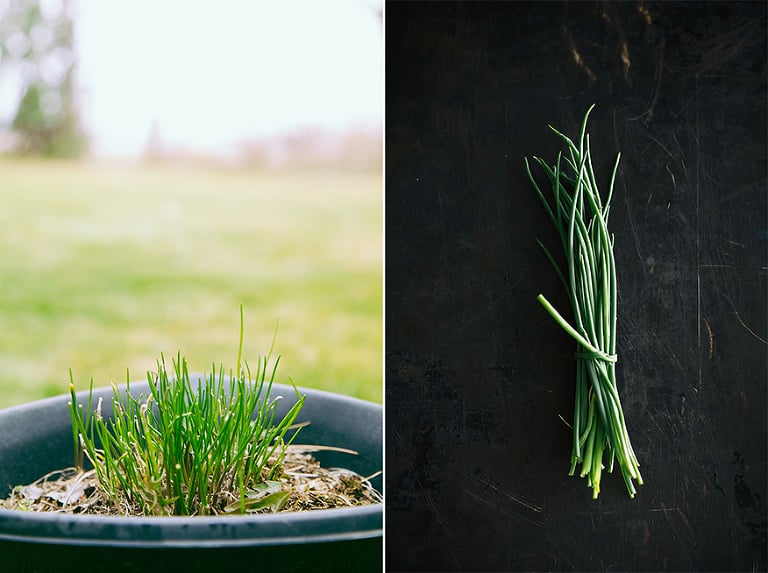 I was cleaning up one evening in the small kitchen at a community centre in the city. An after-school program held for teenage girls had just wrapped up. In the previous 3 hours, we had talked about the benefits of produce and whole grains for growing bodies, made hummus, wholewheat pita from scratch and a huge tabbouleh salad together. We had also discussed the disappointing aspects of school lunch programs and some simpler things on how their day had gone. I was wiping the counters down, filing away the knives and cutting boards, digging the crud out of the dishwasher strainer as the sun disappeared outside–just trying to finish up so that I could hop on the bus and have a quiet night at home.

As I was wiping the main island countertop, with its stacked pots, bowls and bins of donated wooden spoons + other necessaries stowed away underneath, the two women who ran the program were in discussion. One was holding a can of chickpeas. She led another program at the centre for women who had recently immigrated, where they would cook and discuss the transitions taking place in their lives. Leaning on the counter, she said something to this effect: “The women in my group, they tell me that they don’t know what to do with these. *gestures to can of chickpeas* They get them all the time from the food bank, and because they don’t know them, they throw them away.” This was a strange dilemma (and further proof that food banks are often a bandaid solution to issues of hunger and good health). The wholesome food was made accesible in a very physical and easy way, but the barriers to wellness and prosperity still shot up.

What followed was her strategy of trying to incorporate legumes into more of her sessions, to use encouragement and to approach the many-sided issue, as always, with respect. Something as simple-seeming as teaching individuals to cook and incorporate certain foods into family meals led to the conclusion that more support was needed from the community at large. It’s never enough to simply provide the food, wish the individual good day and move on with your life. That disappointingly frequent support paradigm is an exercise in isolation. The second that dignity is compromised, the road to health and vibrance becomes rougher and frustratingly longer for the individual. There is a disconnect between their life and the community that they are trying to thrive in. By asking questions and thinking on her feet, this woman was paving a way forward, for her program participants and their families.

This moment of realization and moving ahead is on my mind often and remains a motivation when I develop a recipe. It’s the reason why I would never, ever say that refined flour is inherently bad, that sugar/agave/any sweetener should be banned from your cupboard without question, that all of your stone fruit must be organic because the pesticide level deems a conventional version too toxic etc. It is wonderful to work with whole grain flour, natural sweeteners and organic produce, sure, and sometimes those things can be quite affordable (this depends on your priorities too). But you have to know what to do with them first. Food has the power to heal and nurture, but it is first and most importantly necessary for life. It gives you strength for everything else.

So I made you a salad primarily composed from chickpeas and stale bread this week! The vegetable component is 3 distinct alliums (just onions!). The grassy chives, the pungent red bulb onion and sweet charred leeks. These flavours epitomize early spring for me. We stuck a chive plant into an old pot many years ago, basically neglected it and have since been rewarded with emerald green, fresh blades every year when April rolls around. Low maintenance, supremely cost-effective flavour right outside my door. I am trying to work more towards dishes with this kind of feel–ones that anyone can make in whatever capacity so that they can go into other aspects of their lives with vibrance and capability, whether because of nourishment or a small shred of empowerment. 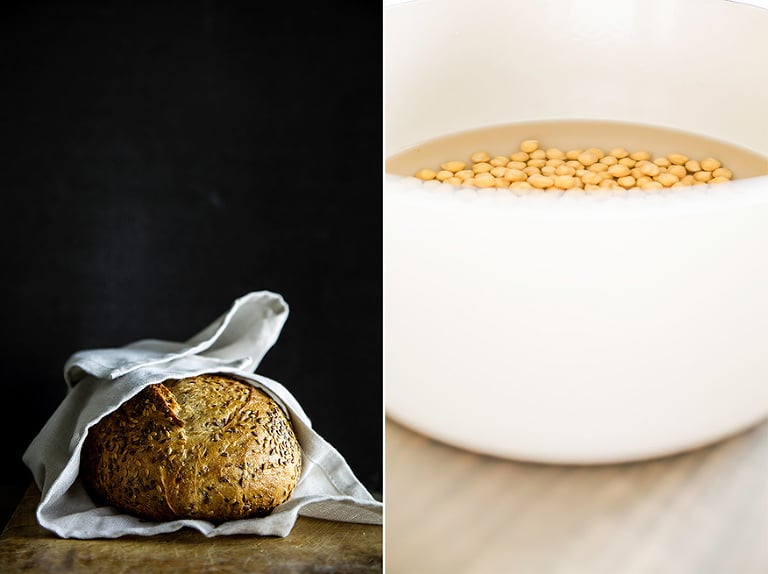 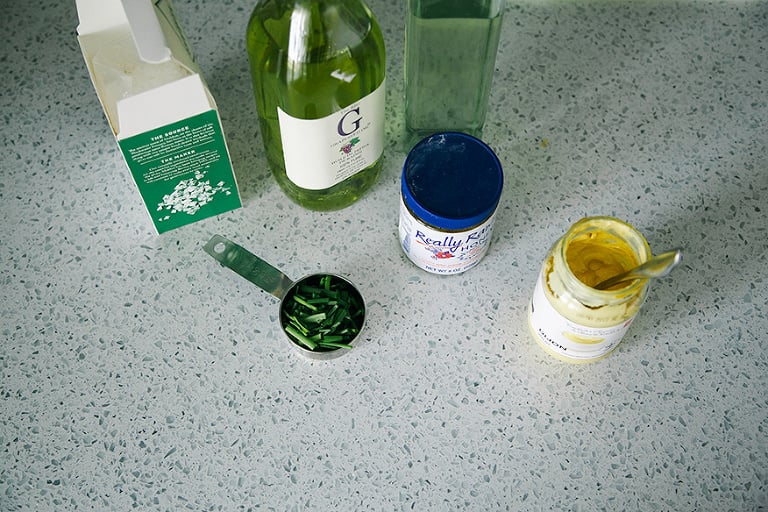 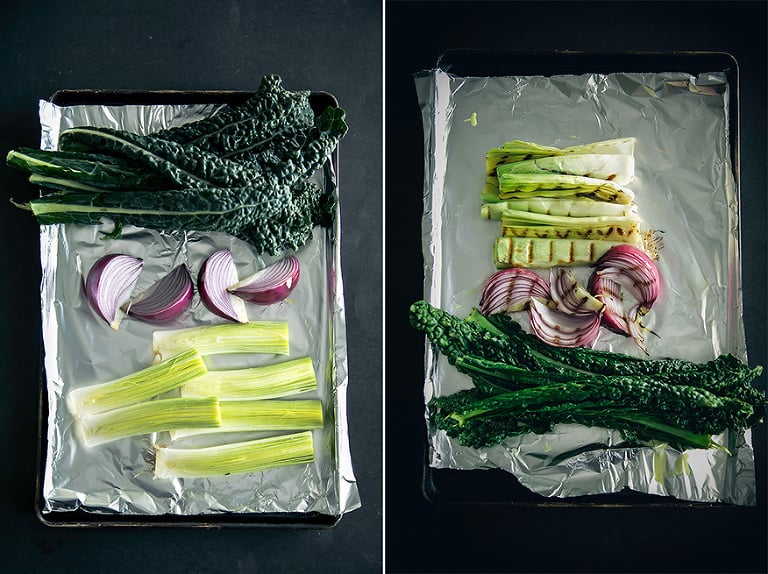 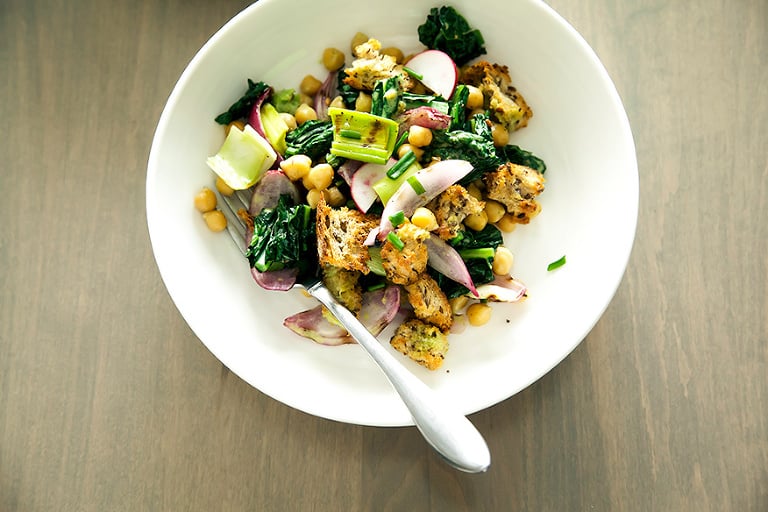 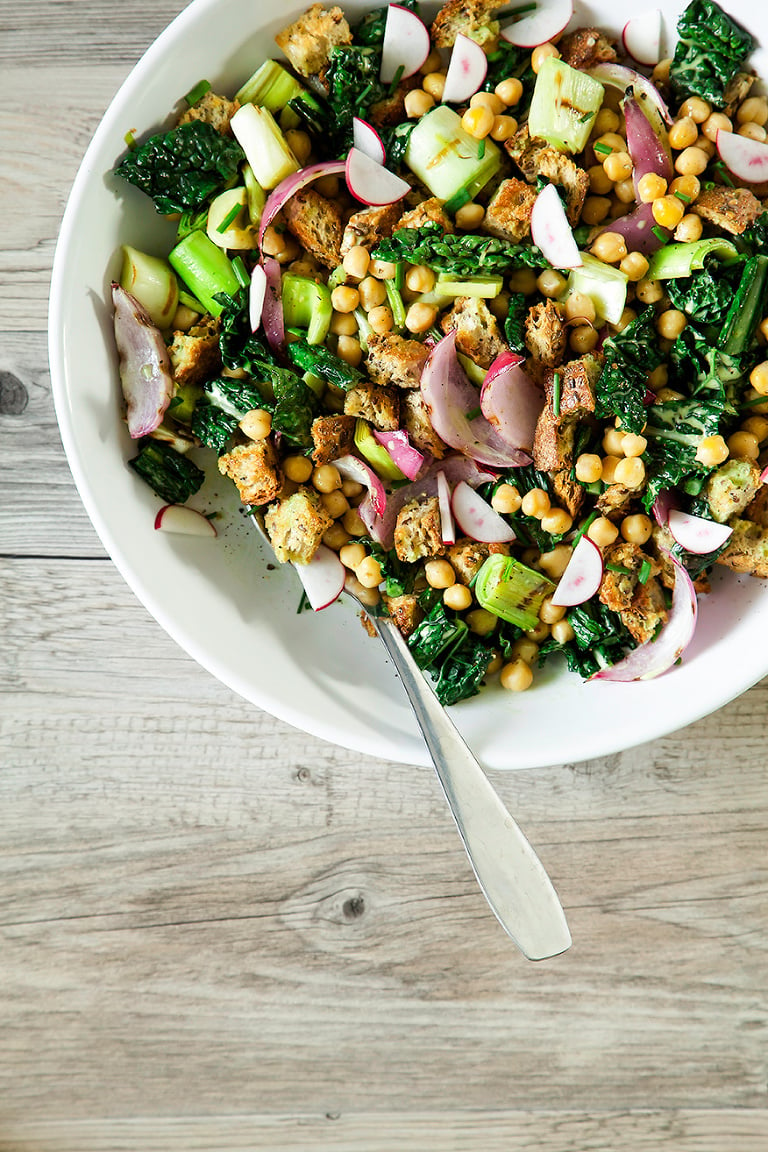 CHICKPEA, SPRING ONION, KALE & BREAD SALAD (Spring Panzanella)
Print the recipe here!
SERVES: 4-6
NOTES: If you have ramps or green onions popping up where you are, I would definitely slice up the greens of either and add them in. Also, I grilled some of the vegetables, but have included instructions for oven-roasting here, since that seems to be more of an option for people. If you have a grill, just brush the veg with some oil, salt + pepper and place them on a medium-high grill until charred a bit and soft.

On one sheet, toss the cubed bread with 1 tablespoon of the oil and season to your liking. Once all of the bread is coated, slide the sheet into the oven. Bake for about 13-15 minutes or until bread pieces are deep golden brown. Set aside.

Cut the trimmed leeks in half down the middle, lengthwise. Rinse them thoroughly to remove any grit between the layers. Place them on the other lined baking sheet. Place the quarters of red onion on the sheet as well. Toss the vegetables on the sheet with the remaining tablespoon of oil and some more salt + pepper. Slide the sheet into the oven and roast for about 20 minutes or until the vegetables are browning and getting tender. Toss the kale leaves onto the sheet in the last 5 minutes if you like, or leave them raw. Allow vegetables to cool slightly.

While vegetables are roasting/cooling, make the dressing: Combine all of the dressing ingredients in a blender or food processor. Mix or pulse everything until a pale green and creamy mix is achieved. Taste it for seasoning, adjust if necessary and set aside.

In a large bowl, combine the chickpeas and toasted bread. Chop up the leeks, red onions and kale into bite size pieces and toss them into the bowl as well. Season the spring panzanella with salt + pepper if you like. Pour the dressing on top (you might have a bit extra). Toss everything together to combine. garnish the salad with chopped chives and sliced radishes. Serve immediately.