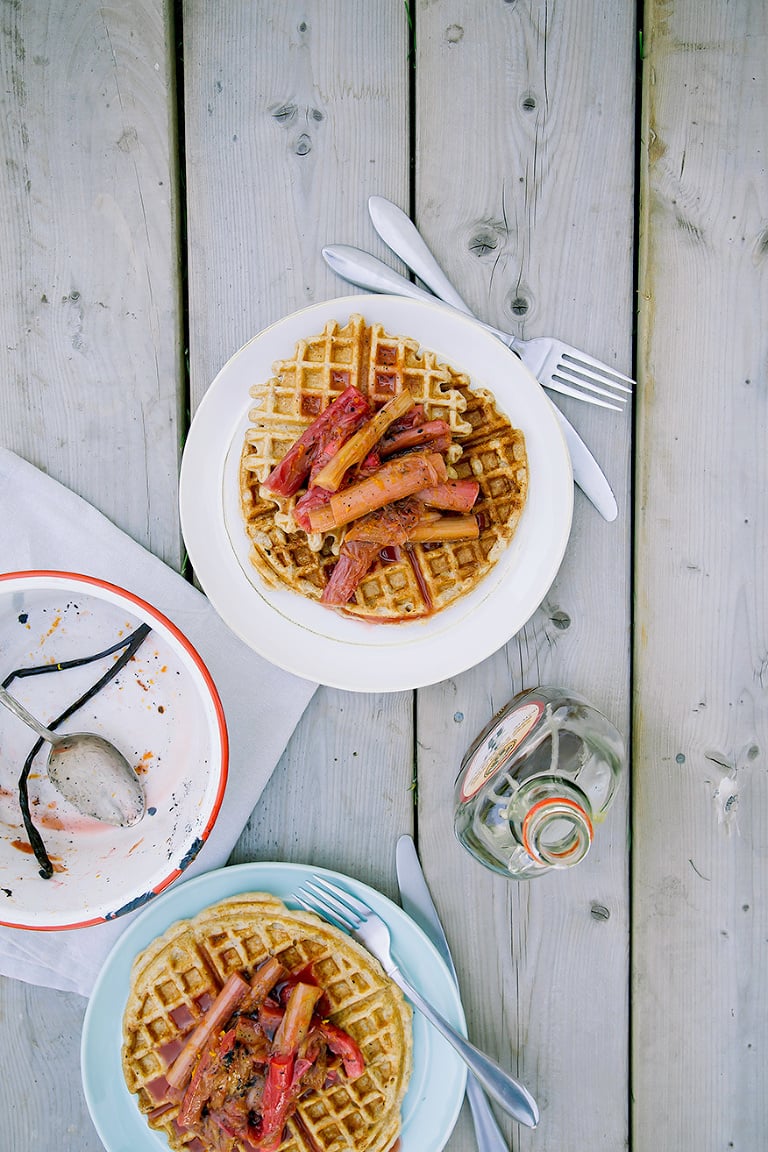 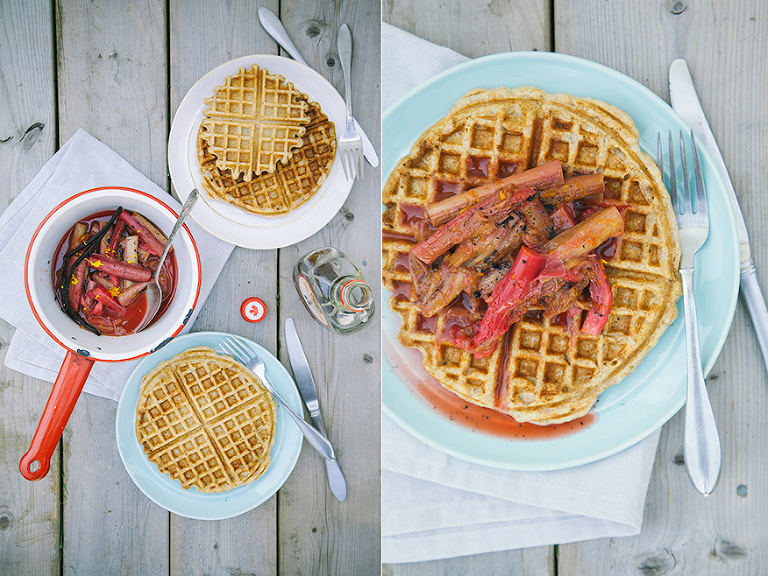 Have I ever told you how this blog came to be a real thing? As in an internet real thing? My friend Michelle pushed me to do it. It took a bit of convincing. I generally liked food blogs, but was also annoyed by them all the same. The more I mulled over the actual existence of it, the less I thought I had to contribute to people’s actual lives in a productive sense. I knew a few things about cooking, had studied nutrition and held some very solid dinner parties in my time (including that one where I made straight bourbon slushies with little more than a sprig of mint to “soften the blow”), but a regular log of that stuff–where people can see it and generally like or be annoyed by it too? Eeeeeenh. It took me a solid bit of time, waffling between the reasons why or why not (see what I did there?).

And my friend kept at it until I dredged up the gumption essentially. She would gently nudge me on what I could contribute in a real way. There were texts asking me about a particular ingredient or cooking technique, with the obligatory reminder that qualified the creation of a site. Jokingly, she would mention its sheer benefit to her own life with food.

So I tried making and photographing a few things with a purchased domain just kind of sitting there. I agonized about those first recipes. They weren’t good enough, I hated the photos (I have an embarrassed fondness for a lot of my old photos now), the whole thing felt kind of silly (“blog” as an actual word, bluh awful)–just riffing on healthy seasonal foods to a solid following of 12 people (hey mom!).

Nowadays, the number of readers is a bit higher and this project has contributed a lot of (sometimes crazy) greatness to my life. I’ve only been tempted 4 times that I can remember to start a post with “Guys, I hate blogging. Fuuuuuuu–” …So, many wins. But still, every little speck of opportunity I get because of it, you betcha I’m letting my instigating friend hear about it first and foremost. This usually leads to a blitz of !!!’s and “Holy shit!” kind of texts, which is pretty much the most fun. I was compelled to talk about this here, to serve as a reminder of the serious abundance she’s helped bring into my life and why I keep at this thing. What I’m driving at here: You need to keep the good + positive people around you, to remind you that a blog isn’t always the silliest thing in the world. Or to just help you work towards actually creating and becoming something to wave from up high with all of your pride.

Since Michelle is pretty keen on pointing out that I probably just want to post breakfast treats all the time (I do), I made some waffles for y’all this week–with my first bunch of rhubarb that I bought from a really sweet lady on the side of the road over the weekend. She weighed the bunch on an old-time-y scale, questioning its accuracy as the bunch seemed to thicken rather tremendously. I brought it home and stewed half of it with tons of vanilla bean flecks, orange zest and juice, and slid the mushy heap of it right onto the tops of golden, yeasted buckwheat-y waffles. What could be better enjoyed outside in a spring splendour? Nothin’ at all.

Did you know that rhubarb and buckwheat are botanical relatives in the category of pseudocereals? I thought this was kind of interesting for a few reasons. Both ingredients seem to take a few tries to fully appreciate for one. Buckwheat flour has a bitter, wine-y quality that requires thoughtful pairing in a general sense–in blinis with smoked fish + horseradish, mixed into pancakes with roasted pears, as noodles in fragrant + perfectly salty/pork-y ramen broth. Its aroma is sweet and colour delightfully purple-ish heather grey (this tends to fade throughout the course of cooking/baking). Rhubarb is notoriously sour, and like buckwheat, not often enjoyed on its own. Pairings of berries, heavy cream and heaps of sugar are utilized with frequency and um yep, it’s pretty delicious with riesling and other white wines. So I thought that the two together would make a very happy union, one offering up what the other lacked with an enthusiastic drizzle of maple syrup, a heavy hand of wholewheat pastry flour to balance the assertiveness of the buckwheat and flecks of warm spice throughout the waffle. We ate them outside in the shade, perched at the tiniest patio table, completely full in all ways imaginable.

Waving hello from some strange (but wonderful) summer-in-spring weather. xo! 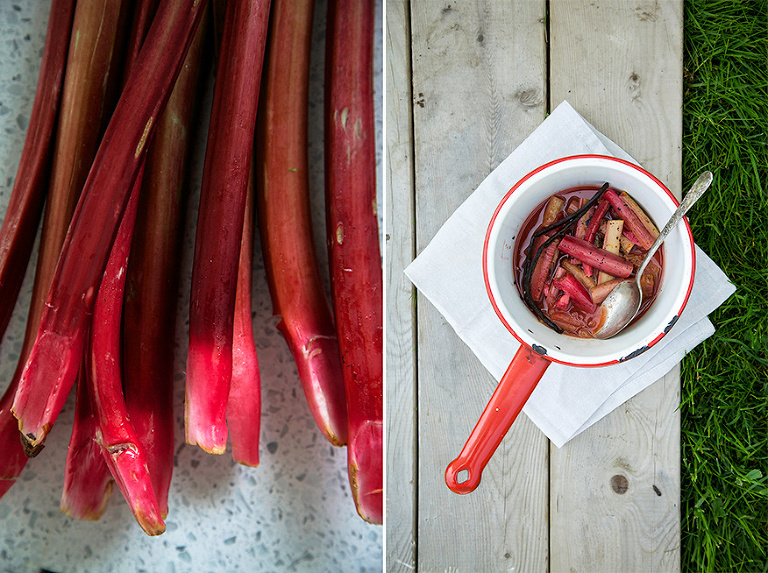 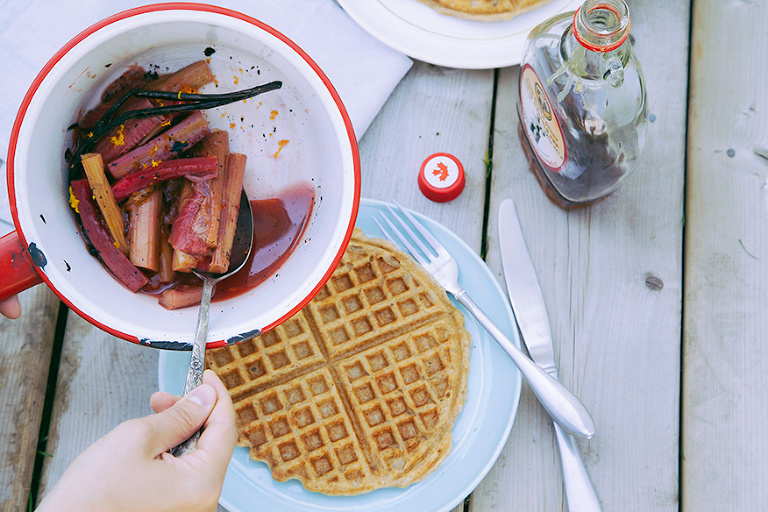 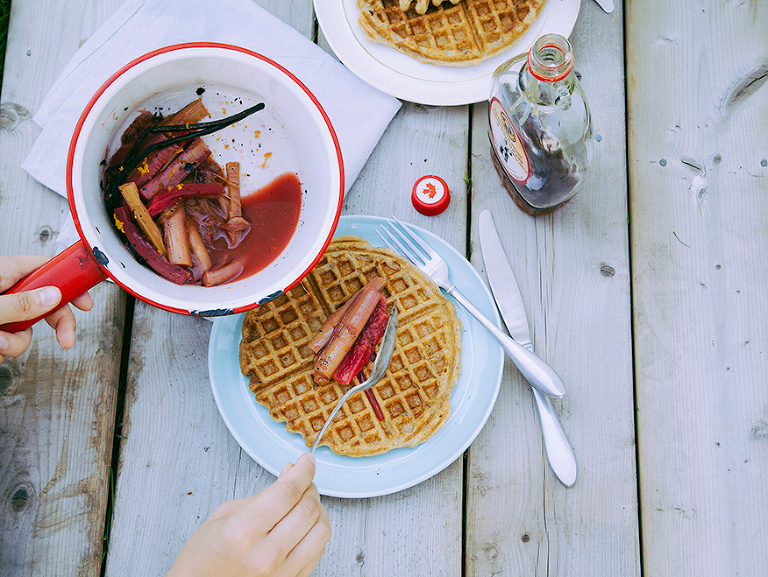 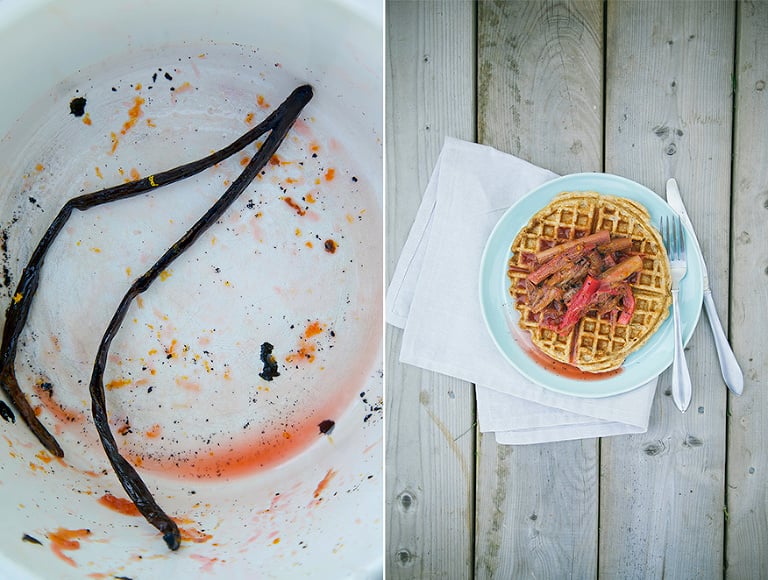 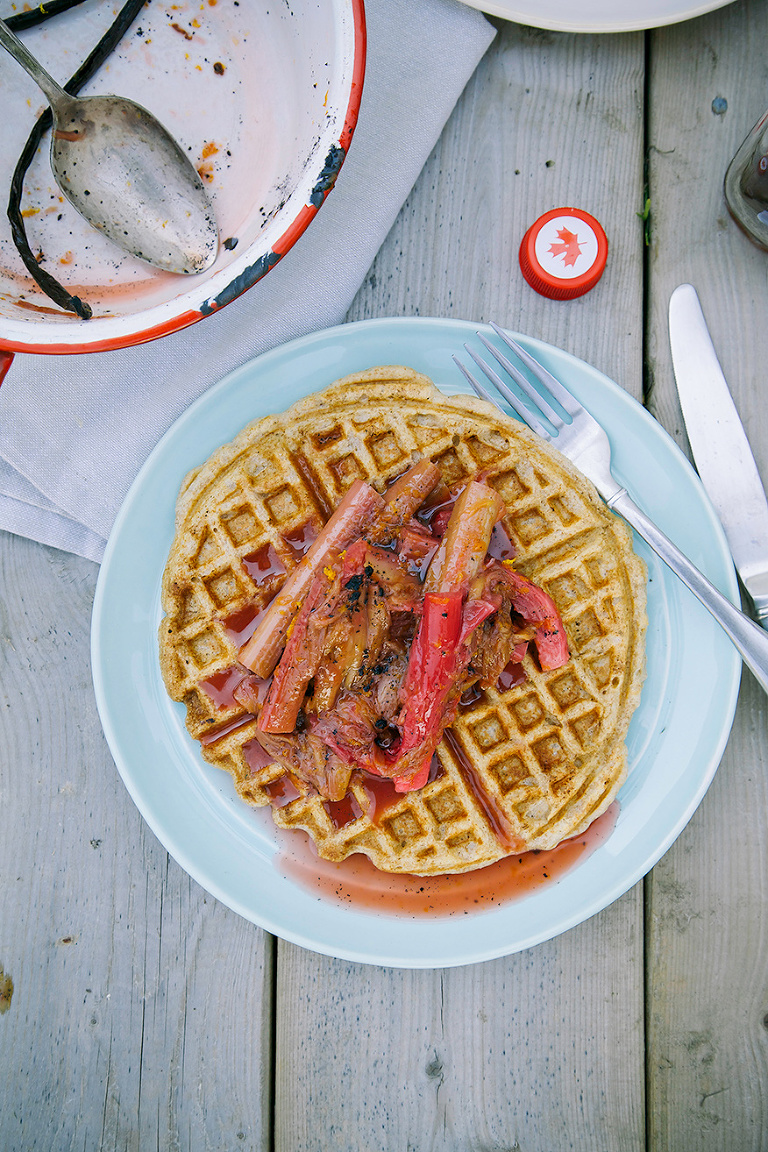 RAISED WAFFLES WITH BUCKWHEAT & VANILLA-STEWED RHUBARB
Print the recipe here!
SERVES: 2-3
NOTES: You have the option to raise the batter on the counter for 1 hour before you plan to cook the waffles OR for a 1/2 hour on the counter + a covered overnight rest in the fridge for extra developed flavour from the yeast. The stewed rhubarb remains pleasantly sour, so I would recommend serving these with some maple syrup on the side for the lovers of sweetness in the am hours.

In a medium-large non reactive bowl, combine the warm almond milk and yeast. Let the yeast dissolve and become part of the milk for a few minutes.

To the almond milk and yeast, add the honey, oil and vanilla. Give it a stir. Add the buckwheat and wholewheat flours, cinnamon and cardamom. Stir until just combined, then add the water and stir one more time. over the bowl with a damp towel and let it rise in a warm place for 1/2 an hour. Cover the bowl with plastic wrap and let it sit in the fridge overnight (or let the batter sit on the counter for a full hour and go from there if you’re okay with slightly less developed flavour).

Meanwhile, make the braised rhubarb. Combine the rhubarb, maple syrup, orange zest + juice and vanilla bean seeds in a medium saucepan (throw the vanilla pod in while it cooks too). Let it sit over medium heat until there’s some faint bubbling. Let the rhubarb cook until soft and syrup-y, about 12 minutes. Set it aside or keep it warm until you’re ready to serve the waffles.

Remove the batter from the fridge and stir in the fine sea salt. Let the batter rest while you preheat the waffle iron. I find a higher done-ness level is desirable with yeasted waffles in general, so there’s that. Grease the waffle iron and cook waffle batter according to your maker’s directions (almost 1/2 the batter per waffle in the iron for 3 minutes or so for me). Enjoy waffles warm with the stewed rhubarb.