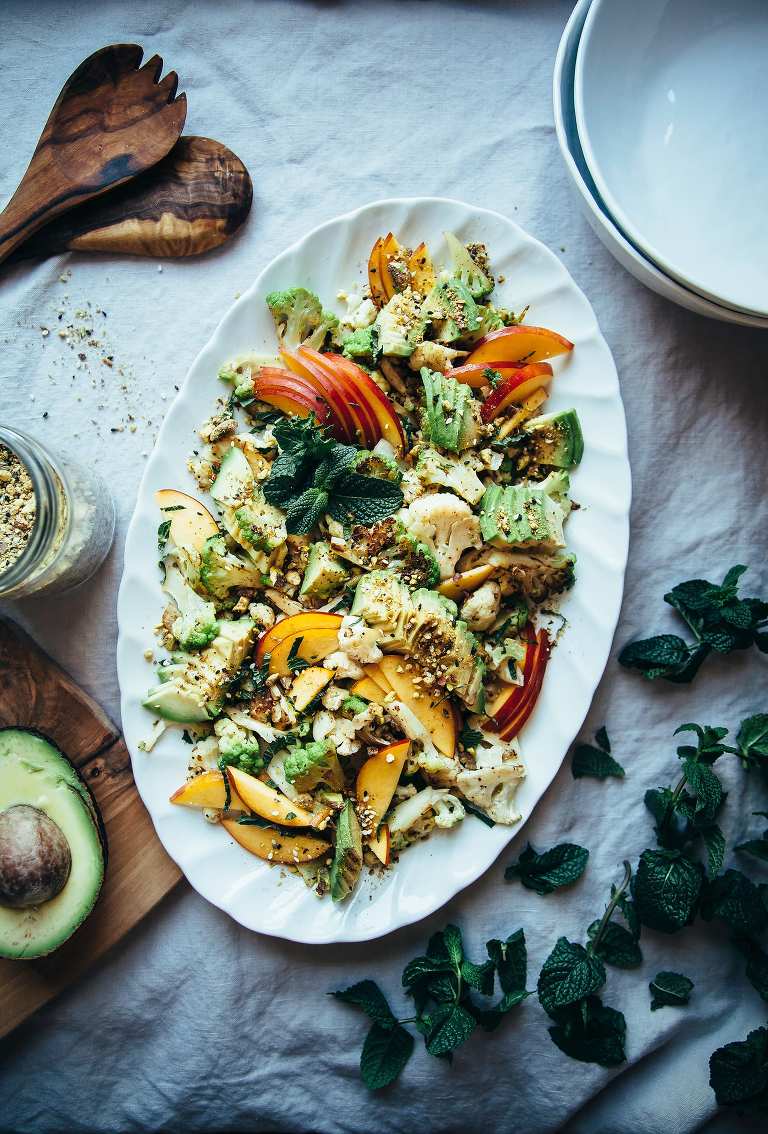 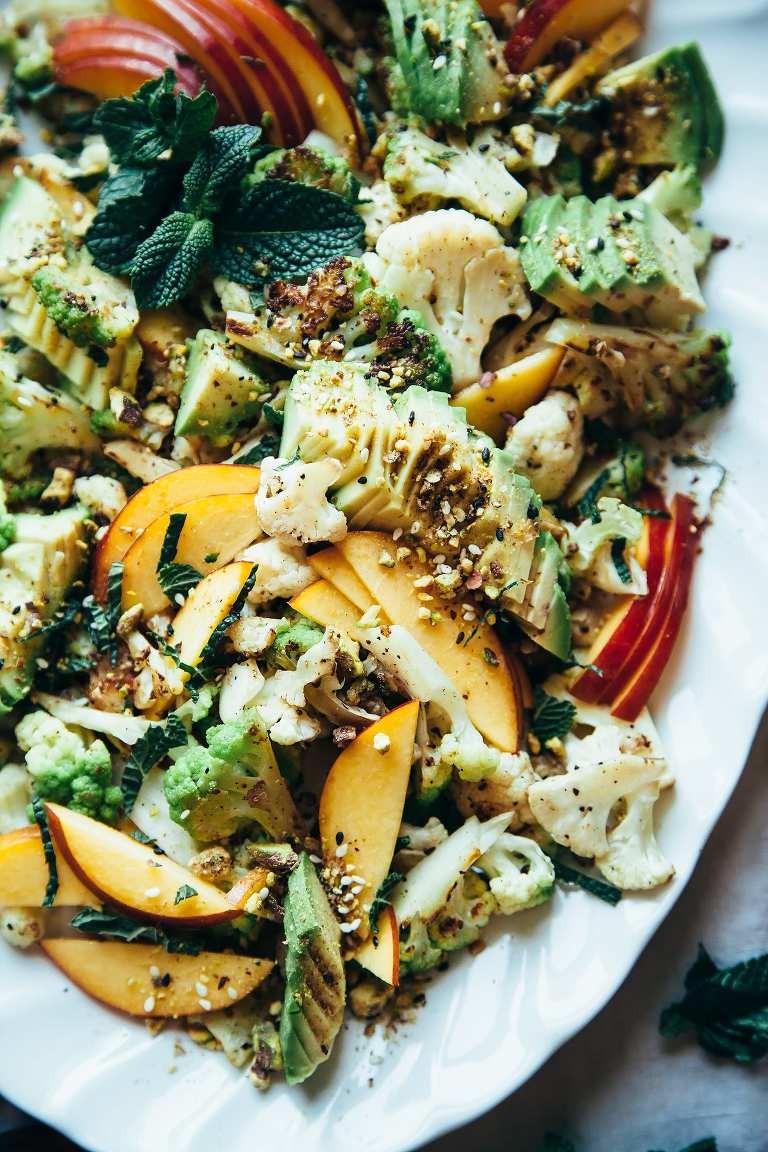 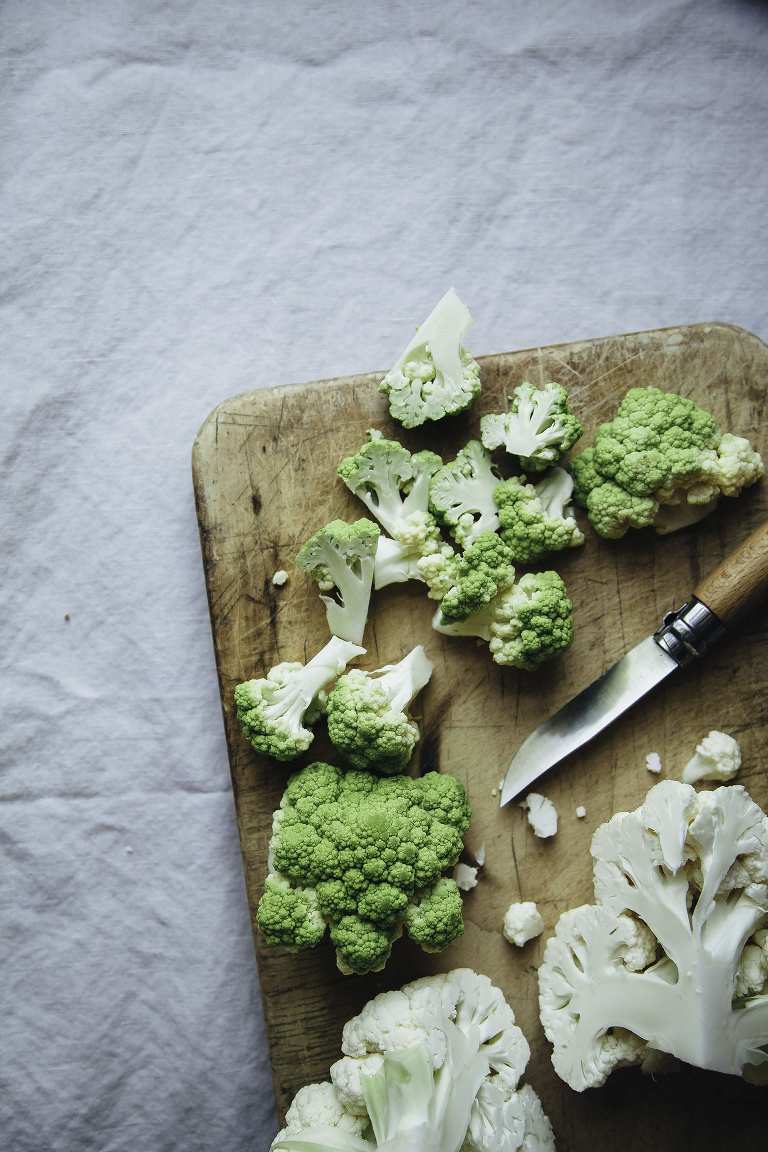 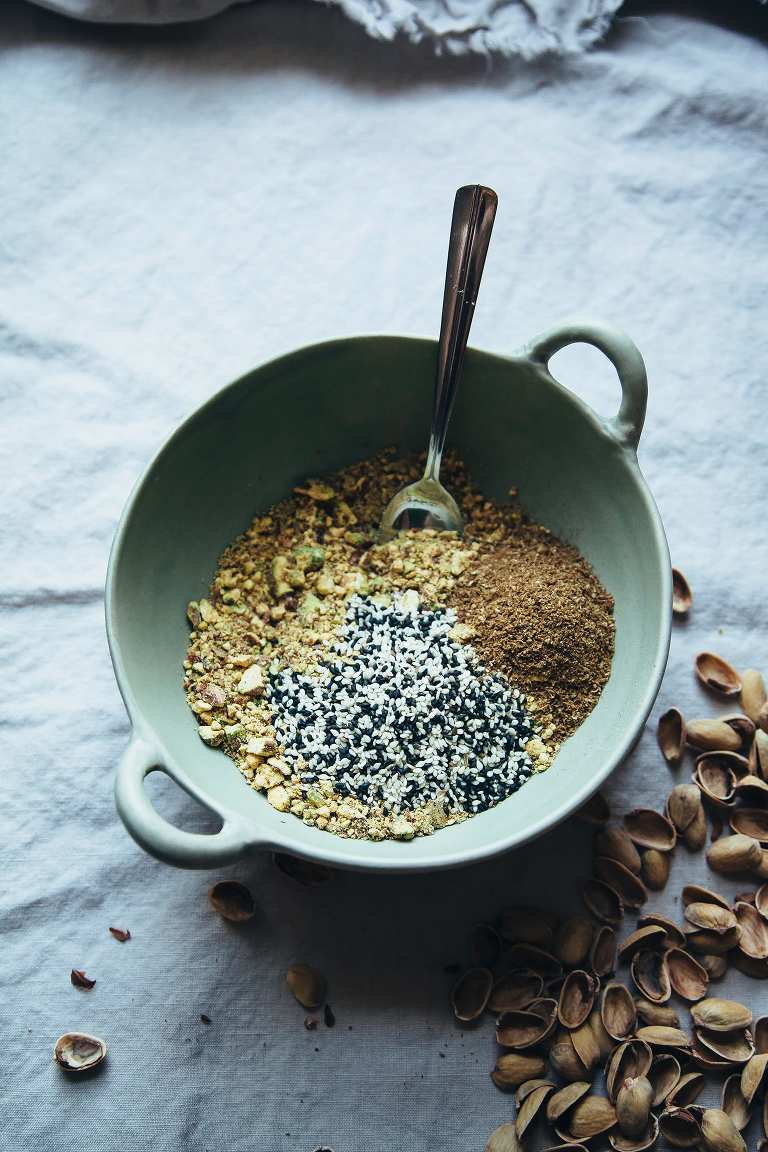 I’m guilty of this, but it seems like cauliflower gets a lot of attention as a cold weather vegetable. It tends to do better with the cozy and winter-y cooking treatments (roasting, mashing, and simmering into a creamy soup, among other things), so I guess that’s why? Whatever the case, it’s in season right now where I live, and this salad just sort of came to me when I put a couple heads of it in my shopping bag the other day. I have a hunch I’ll be making it all summer though.

Have you ever had dukkah? It’s a mixture of toasted and ground spices with nuts and seeds with Egyptian origins. It kind of works like a spiced, savoury sprinkle. With its core application, you can dip a nice piece of bread into some olive oil and then dip it again in the dukkah. So delicious and satisfying. I like to make up batches of this mix, tweaking it a little bit every time in terms of nuts used and the ratio of spices/seeds.  I put it on all sorts of things that need a bit more flavour or a new textural element.

I thought about grilling the pieces of cauliflower for this at first, but then I also thought about tediously flipping all those little pieces and swearing when the small ones slipped through the grates. So I went for a quick cast iron sear instead.

Once you have the dukkah out of the way, this one comes together in about 15 minutes. The nuttiness of the browned cauliflower with the juicy nectarines, fresh mint, lemon, and creamy avocado is really exciting when you get a perfect bite.

With that, I’ll leave you to the recipe. It’s my partner’s birthday this week so I have a beach trip to sort out and a million chocolate and peanut butter desserts to comb through before I decide what to make. If you’ve got a recommendation, send it over! All my hugs and love, all the time xo 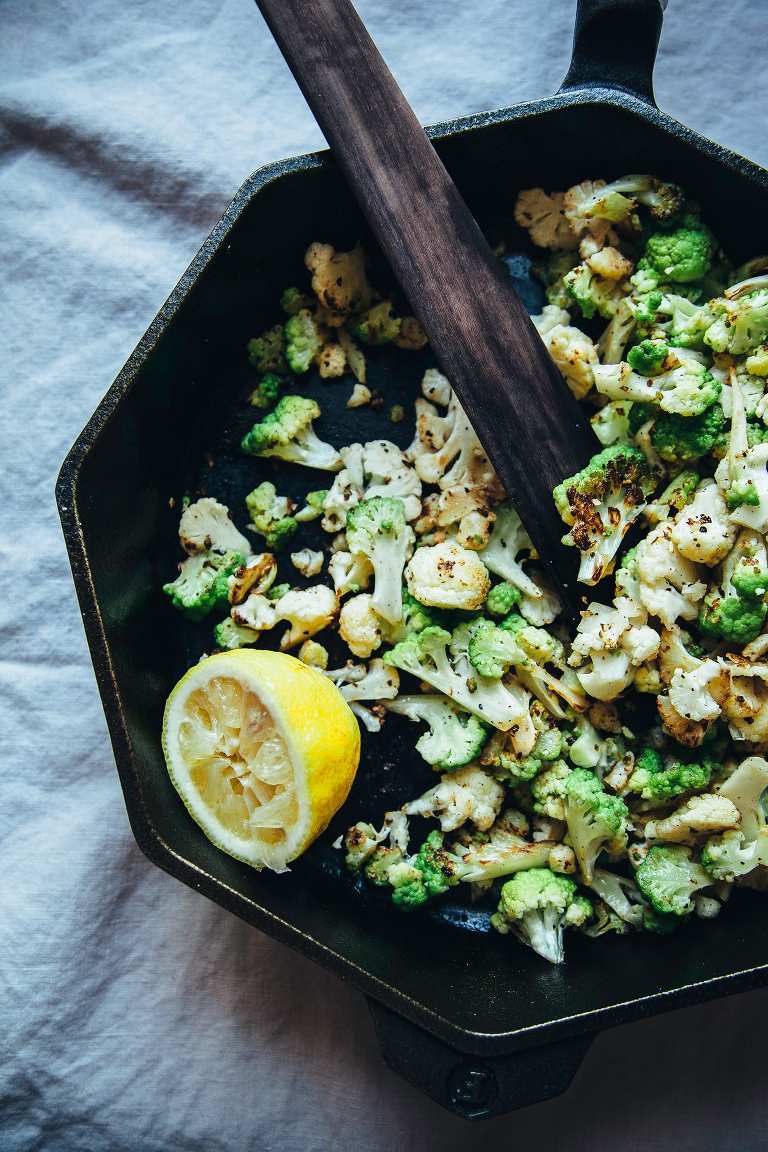 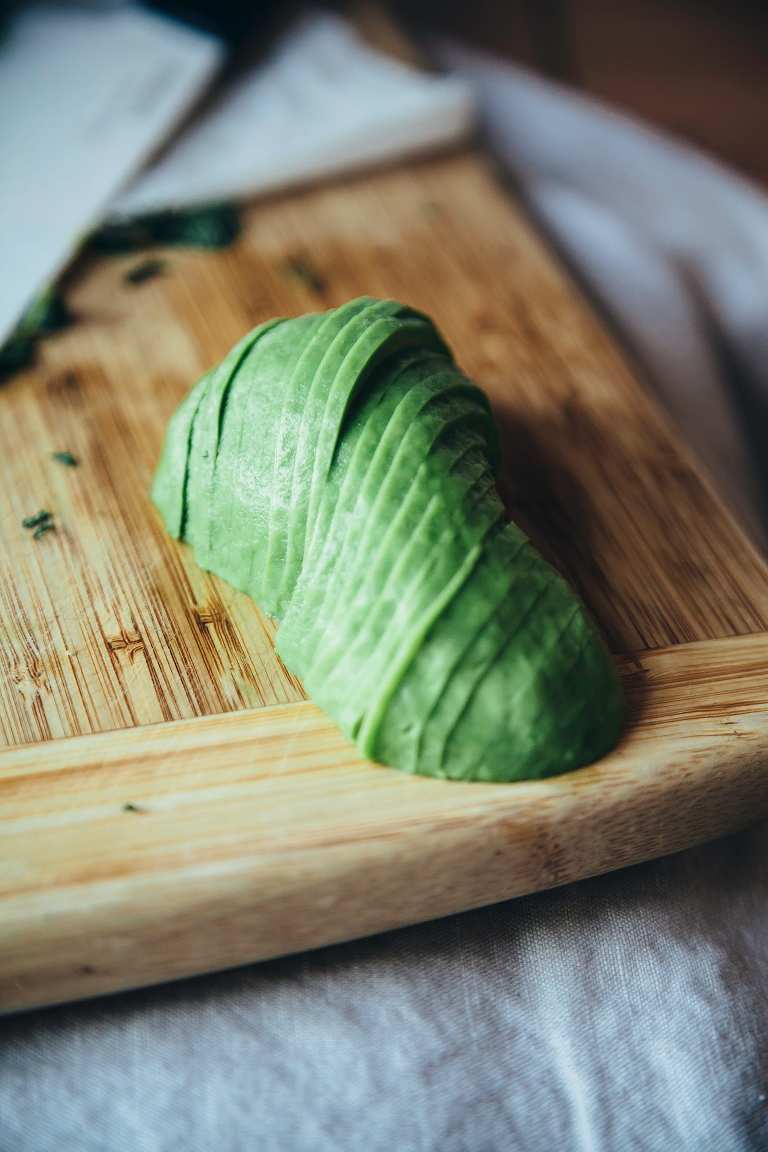 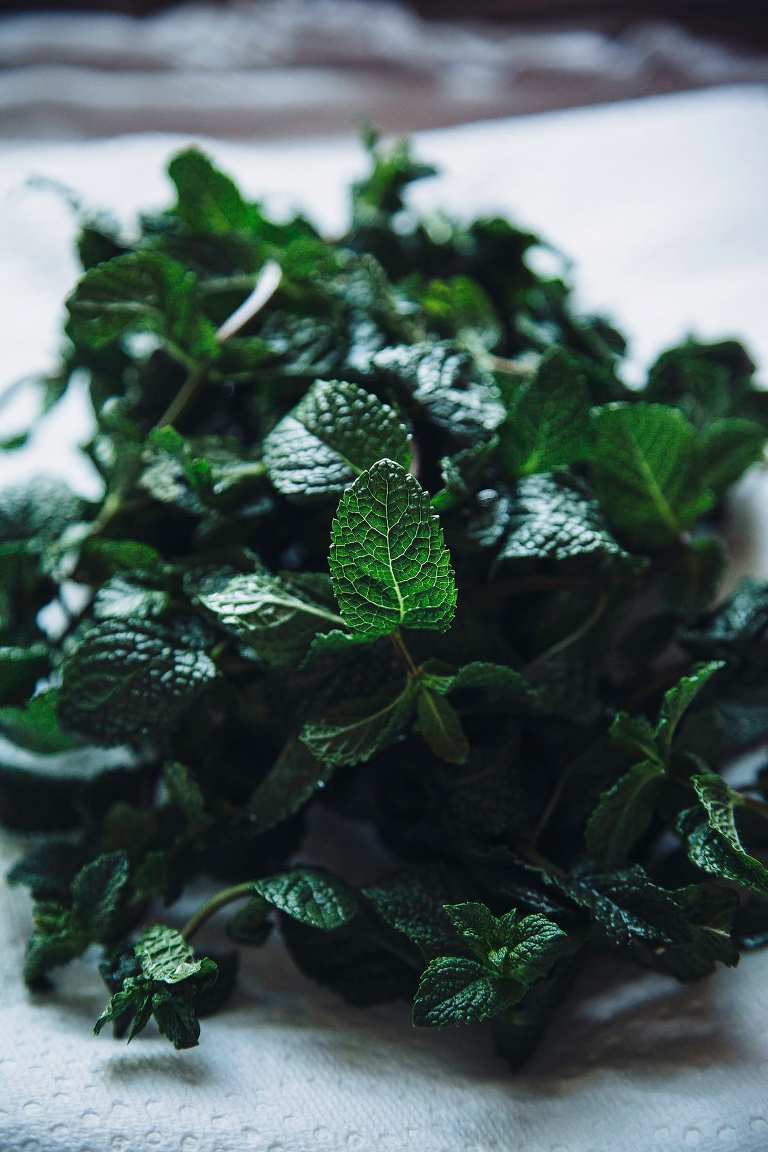 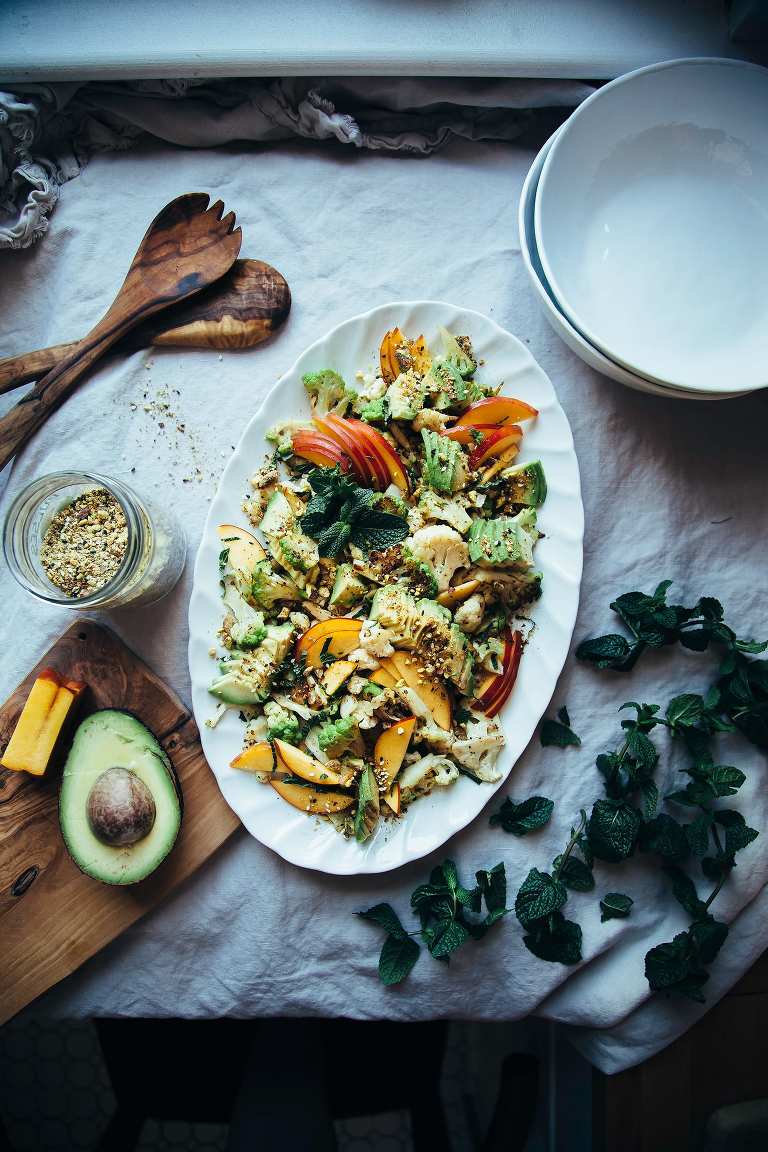 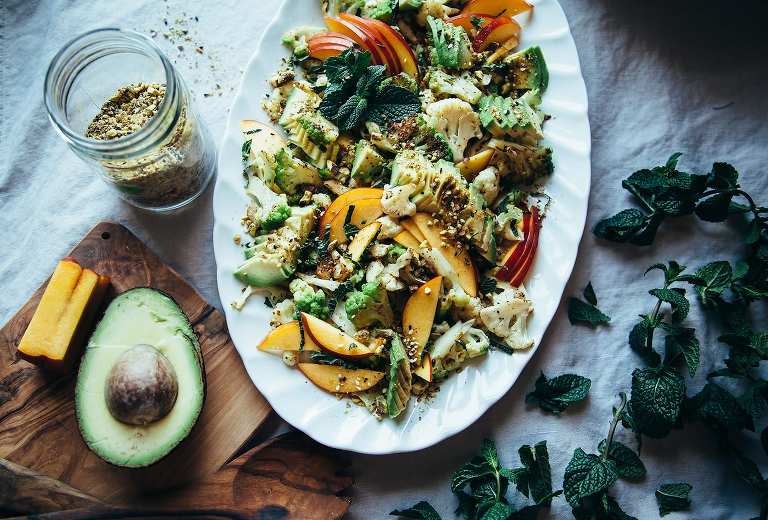 CAULIFLOWER SALAD WITH NECTARINES & PISTACHIO DUKKAH RECIPE
Print the recipe here!
SERVES: 4
NOTES: Roasting the cauliflower in the oven is a more hands-free option if you’re into that (it’s a little hot for me to turn the oven on these days). Just toss the cauliflower florets in about 2 teaspoons of olive oil, salt, and some pepper on a baking sheet. Then slide the whole thing into a 400 degree oven for about 20-25 minutes, or until the florets are evenly golden brown.

This salad doesn’t have a dressing, and that’s by design because I wanted to go minimal on the effort here (outside of some meditative pistachio shelling). I sauté the cauliflower florets in garlic olive oil and stir them up with lemon juice, so that treatment sort of becomes the “dressing” in a way.

Another thing: most dukkah recipes will have you roasting raw nuts and then salting the dukkah at the end. I skipped this and used roasted and salted pistachios. Call me lazy, but it IS summer. Ways to use extra dukkah: sprinkle it on your avocado toast, over plates of hummus, on roasted vegetables, stirred up into yogurt-based sauces, spooned straight into your face etc.

Make the dukkah: grind the shelled pistachios in either a mortar and pestle, a food processor, or a dry-blade blender pitcher. You want a chunky/chopped consistency with a few large bits of pistachio in the mix. Transfer the ground pistachios to a medium bowl. Grind the coriander and cumin seeds in a spice grinder and add them to the bowl with the pistachios. Add the sesame seeds, nigella seeds and chili flakes to the bowl as well. Stir to combine. Store dukkah in a sealable jar and set aside.