Jump to Recipe
Pin Recipe
No ratings yet

Citrus Brussels sprouts slaw is a hearty and fresh winter salad made even more delicious with crispy rice paper “bacon” bits. Made with simple plant-based ingredients in under 40 minutes.

Hi hi, just a super quick drop in today! This citrus brussels sprouts slaw is a bit outside of my usual style in that it has a both a faux bacon AND a faux cheesy component. I know, what is even happening right now?! I don’t typically go for that kind of vibe with the plant-based food, but sometimes it’s fun! Except when there’s seitan involved because the texture of that stuff is too similar to the real thing for me. Not gonna go there personally!

I had seen rice paper bacon floating around Pinterest and YouTube last summer, and was immediately pulled in to the idea of it. This is odd because I was never one of those people that freaked over real bacon, but for some reason, recreating it in plant-based formats is always something that I have to do.

I’ve tried the rice paper method a couple times, and what I can observe is this: it’s 100% suited to making crispy bits for salads/garnishing. I don’t love it as a little strip on the plate/a sandwich because it lacks substance. Its strength is its ultra crispy/salty/shattering quality. Pretty much perfect for topping shredded brussels sprouts with citrusy dressing.

The other thing here is a new formulation of vegan “parm” for me. I’ve been using sliced almonds quite a bit lately–for almond milk, vegan ricotta, and now this cheesy mix. They’re perfect for almond milk because they only need a 10 minute soak in boiling water before they’re ready to go. I incorporate all my old faves in this cheesy, sprinkle-friendly knockoff though–nutritional yeast, lemon zest, and miso.

I know this one looks like a ton of ingredients, but there’s a lot of overlap with relatively simple steps. Plus, this recipe makes extra dressing and parm for a few extra tasty meals. Hope you all get to enjoy a comforting but still mostly healthy salad this week ;) All my hugs, all the time. 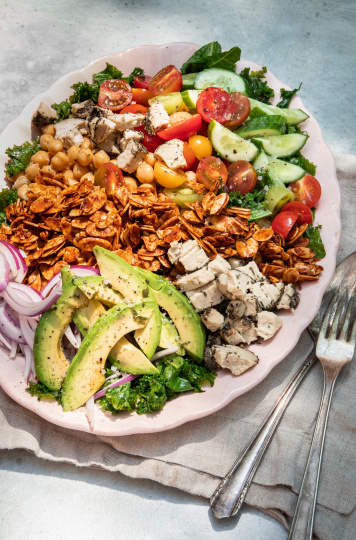