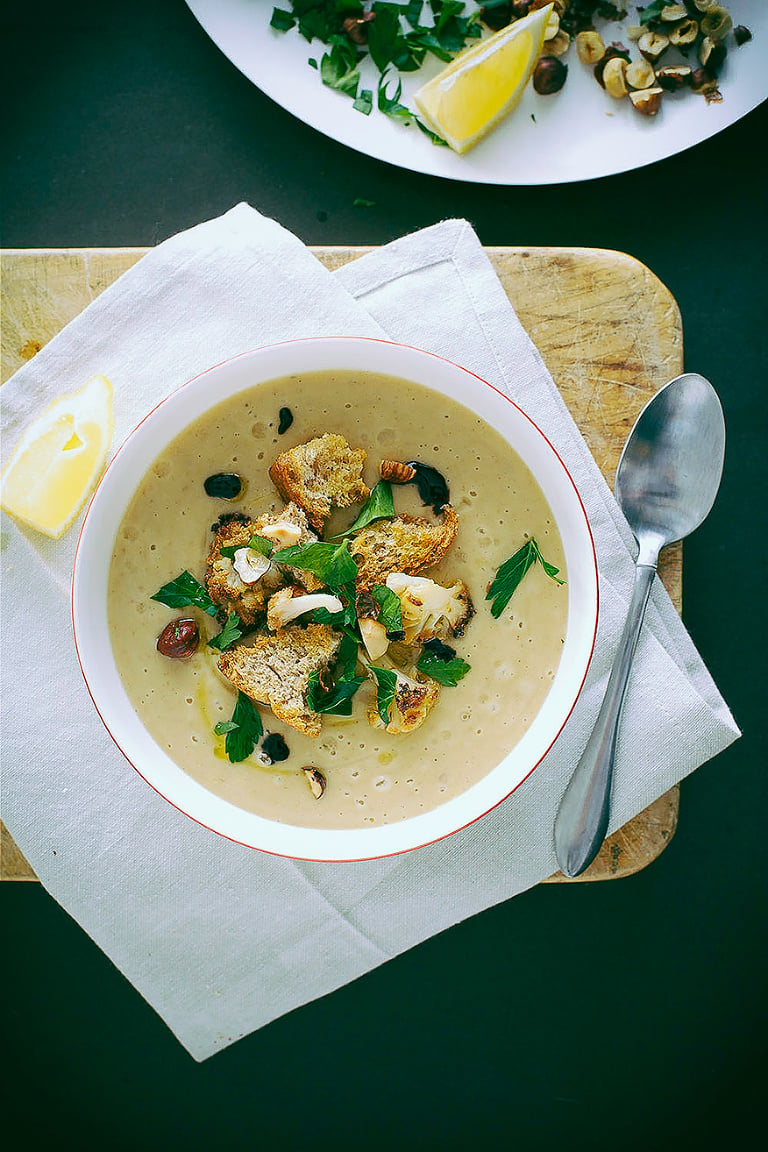 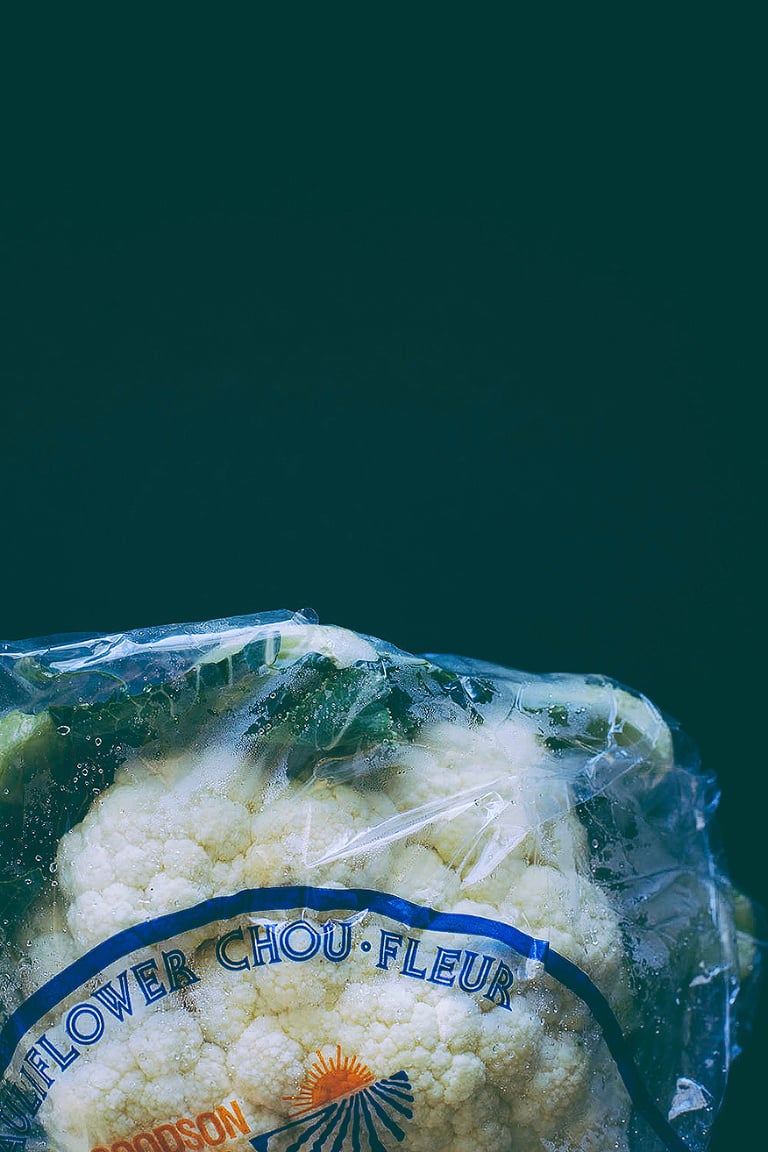 This recipe is easy in many ways. There are 5 affordable, seasonal and accessible main ingredients. It’s just a roast + blend kind of affair, so there’s minimal hands-on time. A bowl is so warm and filling on its own, while the flavour and heft is kind of easy to appreciate as well. There are obvious creamy and nutty qualities, but just the right high note of acidity from a squeeze of lemon waves hello when needed. The rosemary is strong (she does love to be a star), but contends aptly with the musky cauliflower and sweet onions. Potatoes combine with the high water content of the crucifer to make a sincerely creamy purée. This is a recipe I count on in the closing phase of Winter, the most trying phase I feel. There is much to anticipate; the seedlings and building projects of warmer days, but for now there are cellar vegetables and hot ovens to stay loyal to.

In the past couple weeks I’ve made not one, but two things that were complete and utter failures. I am certainly capable of making a lot of delicious things, but I won’t have you believing that everything my hand touches turns to gold on the first try. I have a lot of working experience and knowledge when approaching food, but a little exercise in humility never hurt anyone. The first error was a batch of gluten free and vegan cinnamon buns that was so improbably vile. My expectation was high (as it often is with cinnamon swirly things). The second mishap was a flax granola that was, as I suspected it would be, much too flax-y for my liking. One taste of each elicited a highly dramatic and exasperated “I CAN’T EVEN.” Those things simply weren’t meant to be in my world right now. Some day they will come (but not actually on that flax granola). Tenured chefs get it wrong sometimes and the thought of this provides comfort, a laugh and the motivation to move on.

So I moved on to something I knew front to back and all through the dreamy middle. I used to cook at a little café and when I made it up, this roasted cauliflower soup was always received with a certain surprised approval. Cauliflower, potatoes, and onions on that soup of the day sign… sort of peasant-sounding fare on the surface (there is a charm to that for some). The rosemary fragrance and deep-warming nature of it brought people around I think. I go kind of wild with toppin’s on this (like everything I eat), but the soup is lovely in its simplest form with a little black pepper sprinkle.

Hope you’re all having some cozy and easy days by the oven or wherever you like to be. I had a brief glimpse of sunbeams and chirping birds on an outing today, so I know that the world is at work on something wonderful for us all over again in the coming months. Be warm in the meantime :) 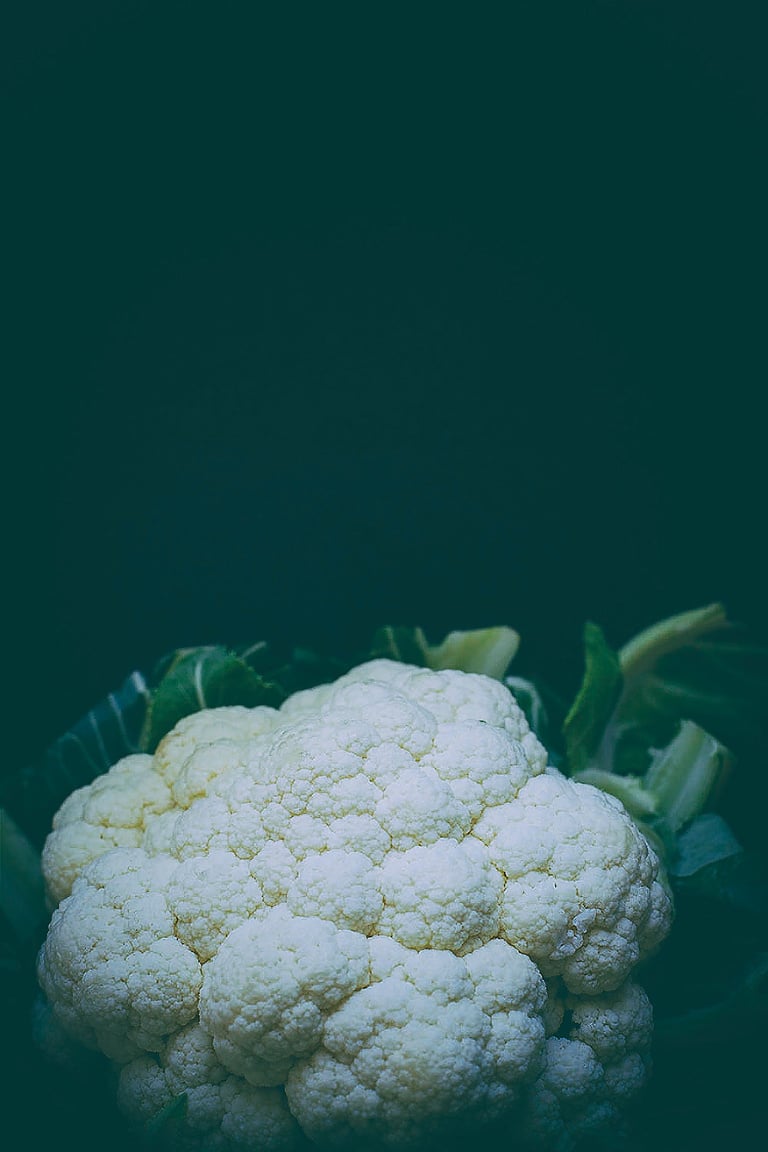 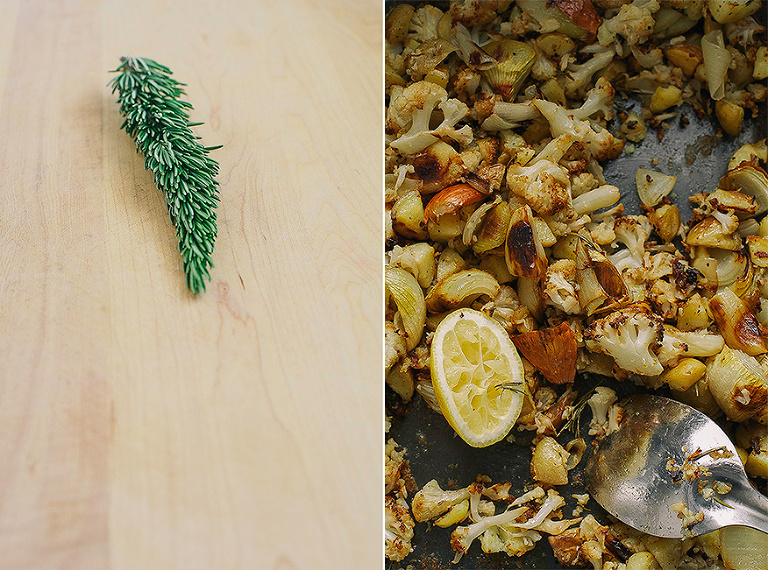 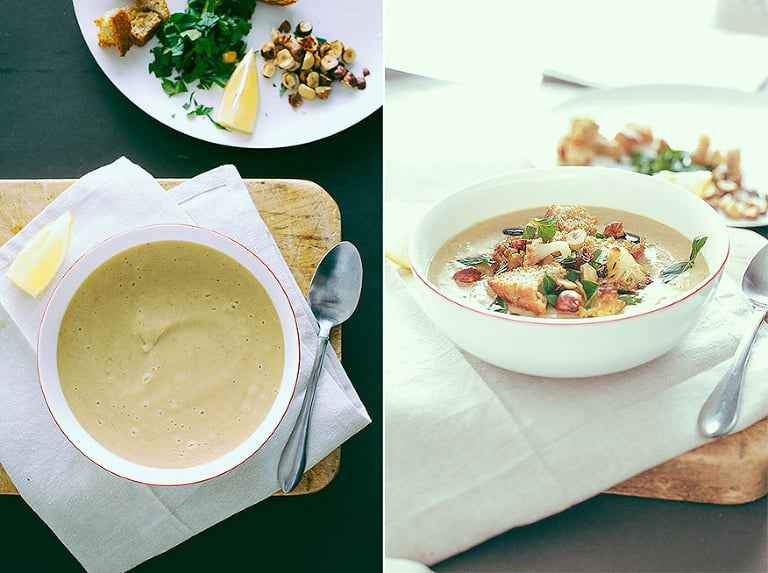 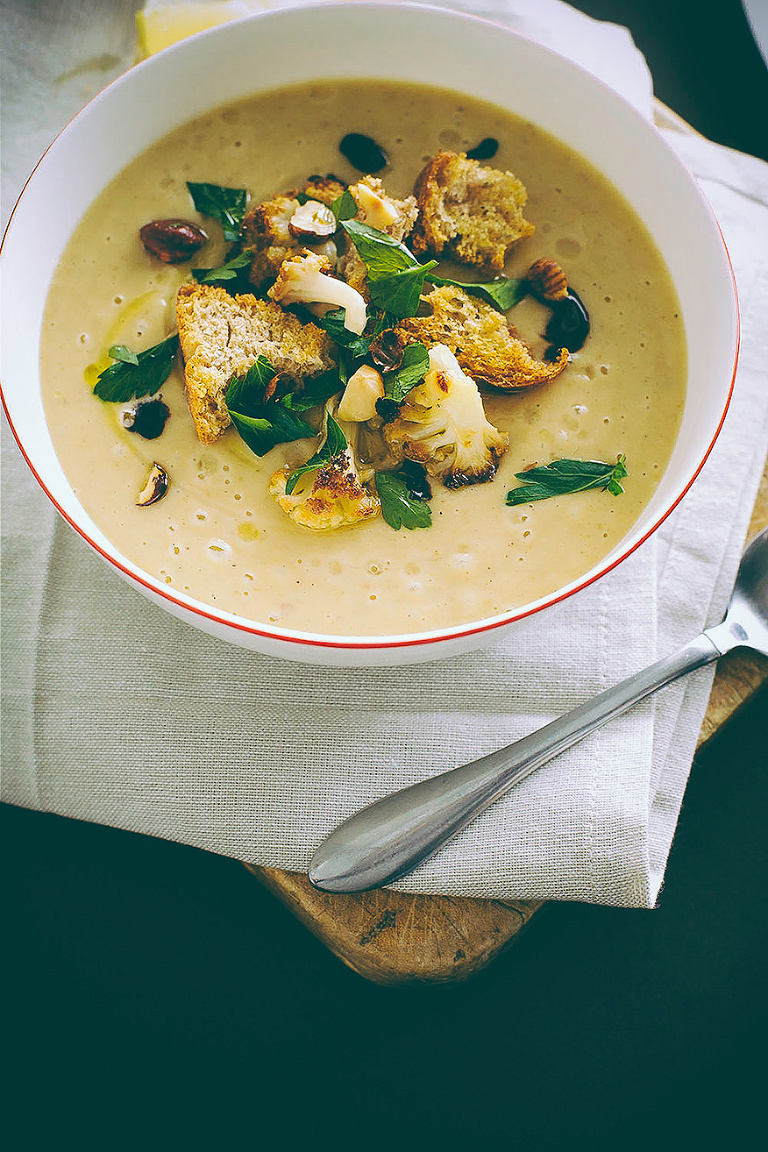 ROASTED CAULIFLOWER SOUP WITH LEMON & ROSEMARY
Print the recipe here!
SERVES: makes a large batch
NOTES: I tend to be of the “More lemon! More brightness!” mindset, but I’m telling you: reservation will pay here. You want just a faint brightening instead of an outright lemony-ness. It will bring out the caramelized qualities instead of burying them in acidity. Also, if you aren’t using homemade stock, most definitely use a no-salt-added variety. I advise on liberally salting the vegetables pre-roasting, so being in control of this factor throughout is ideal.

Preheat the oven to 400 degrees F.

Remove the core from the cauliflower and chop it into rough florets. Place the florets into a 9 x 13 glass baking dish.

Chop the potatoes into pieces about half the size of the cauliflower florets and toss them into the baking dish as well.

Chop the onions into rough 1-2 inch pieces and toss them into the dish. It doesn’t matter if the layers stick to each other.

Roast vegetables for about an hour, flipping and tossing them here and there with a metal spatula/spoon to promote even browning. When done, remove from the oven and squeeze the 1/3 lemon over the hot vegetables (I just drop the lemon into the warm pan when I’m done so that it can release some oil too). Using your metal spatula, toss the vegetables with the lemon juice, scraping the browned bits off the bottom.

Once the vegetables are cool enough for you to handle, start blending them in batches with the stock. Purée until smooth and pour into a big soup pot. Continue blending in batches until you’ve used up everything. Heat the large soup pot full of purée over medium heat until it boils. Add more stock or water to thin the soup out if necessary and adjust seasoning to taste. Serve hot with optional garnishes.