There’s a gal at work who will jokingly proclaim “My body is a temple!” before predictably reaching for something that may or may not promote one’s health (brownie scraps are my favourite example for many reasons). I always laugh because I totally say that kind of hippie BS all the time, but like half seriously. Actually, mostly very seriously haha.

It’s true that at any given time, there are multiple jars of coconut oil open in my house for any and all uses. It’s also true that I use the all natural sandalwood conditioner that donates 47% of its revenue to environmental relief organizations, even though it tangles the heck out of my curly hair. Most of my wardrobe can be described as “flow-y.” I talk about vibes a lot.

All of that is just silly superficial stuff though. I find summertime is when my good habits slip a bit. There are all the obvious reasons and occasions. My entire being is more in the moment in a general sense. I’ve never been one to say no to a patio beer and a salty snack once the sun starts setting. This is a repetitive thing as long as the nights stay warm!

So when I get to a point where I’m craving some freshness, I make myself a really deluxe and mostly raw meal as a bit of a “reset” maneuver. Just everything fresh on a plate. Lots of chewing and savouring and brightness.

Giving tacos the raw treatment isn’t new! Almost any raw restaurant will have a version on its menu, and I will ALWAYS order it. So good. Whether they make a dehydrated tortilla to encase the goodness in or it’s just a simple lettuce wrap, the combination is so satisfying.

There’s some nuts ground into a chunky mixture with spices, some kind of salsa, an avocado component, cashew sour cream, other veg sometimes, lots of lime and flavour. If you have a food processor or blender, it couldn’t be easier to replicate at home either. I decided to make a corn ceviche-ish salsa for mine just to shake things up a bit and add a little sweetness. Don’t regret that move one bit. More great raw-ish, veg heavy recipes in the form of: cauliflower and roasted chickpea salad with avocado, cold veg and mango noodle salad with spicy sesame dressing, and autumn sushi with celery root “rice.” 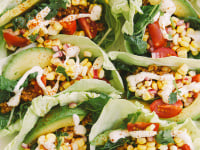