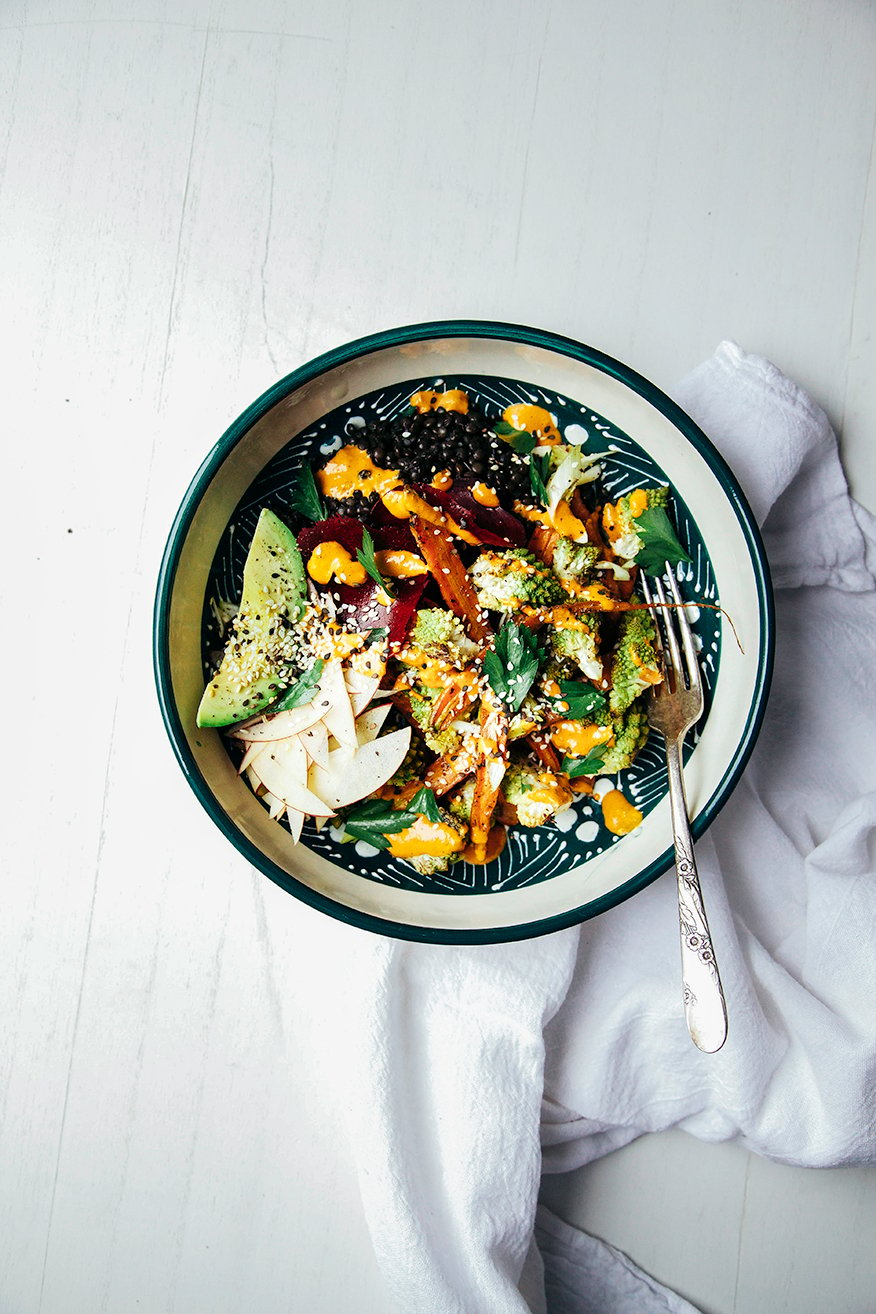 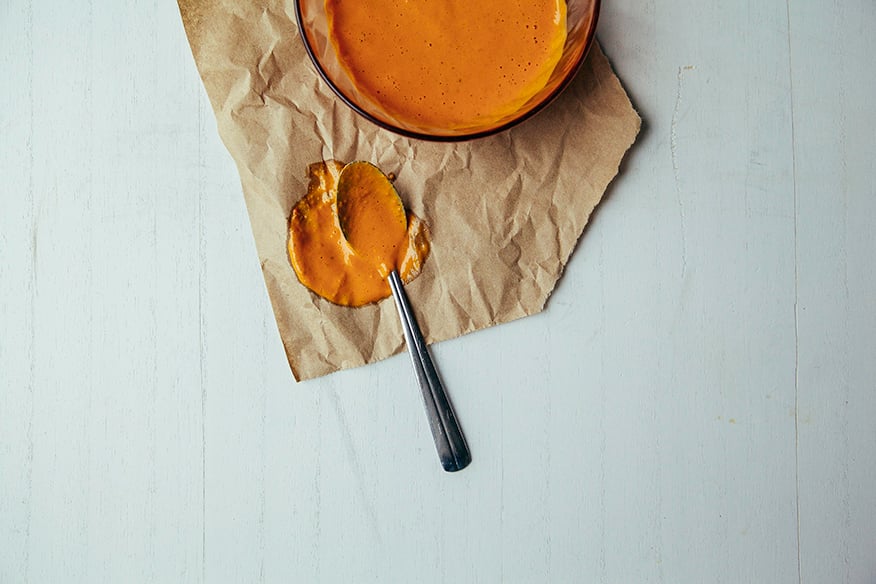 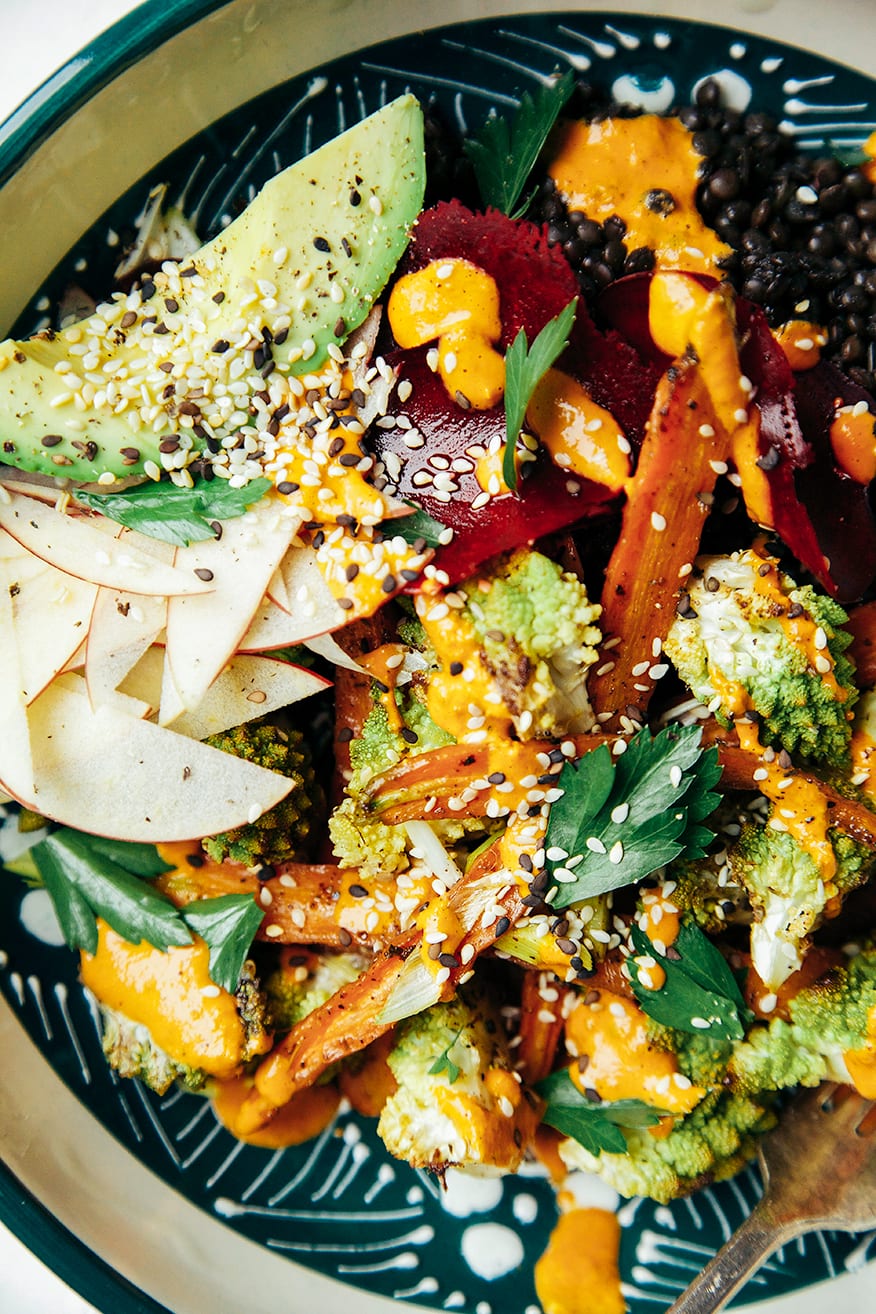 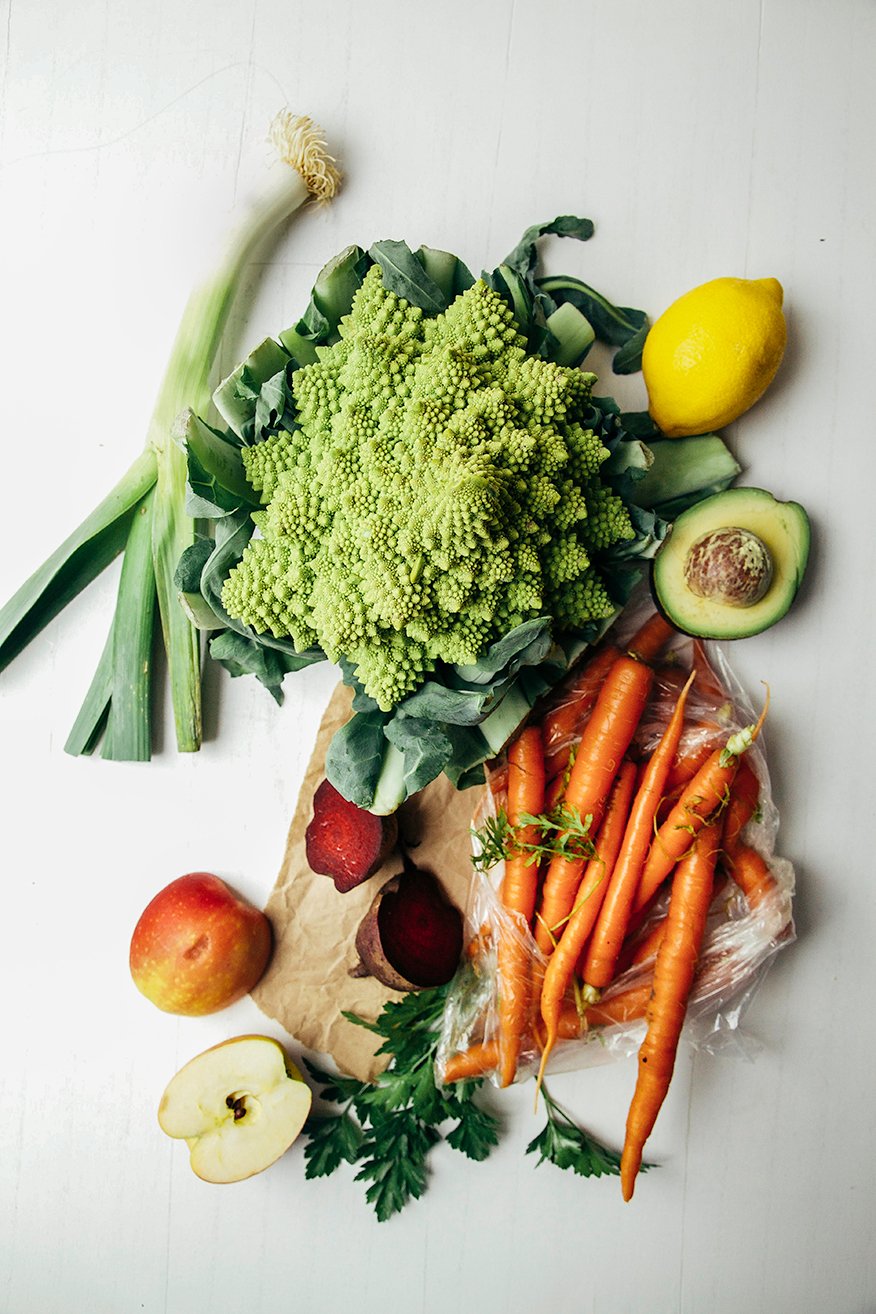 I love sauce. I love the taste-as-you-go nature of making one, re-working classics, coming up with wild new versions, and smothering my food with it, always. Most importantly, I like that I can make a jar-full and have some on hand. I think we’ve been over this before, but I tend to make large runs of basic elements (quinoa, rice, lentils, chickpeas) for combining throughout the week with whatever greens we have, maybe a steamed or raw vegetable, and a healthy swipe of whatever sauce/dressing we’re going on at the moment. Eating well is 99 percent preparation and accessibility.

I’ve been trying to make a delicious and velvety goji berry-based sauce for a while now. The idea of that pretty colour on some cold weather veg was too tempting. It came to me out of nowhere–tahini, ginger and lemon with the soaked goji berries. It would be creamy, a bit bitter, fresh and spicy–all good compliments to the slightly herbal finish of gojis. I like using dried fruit in blended concoctions because they add their own sweetness, but they also make for a creamy consistency.

This goji cream is really well balanced and works for the hearty vegetables that are currently everywhere. I think it would be excellent on a kale salad though. I wanted to roast some of my celery root in the garden for this, but it was so muddy out. I knew it would be like quicksand once I reached for the shovel to dig one. I always have carrots around, but especially now because my dad grew some mighty fine ones this year, so I used those instead. I can never resist a romanesco when I see one, but you know some cauliflower would be just the same. I used black lentils as the base because I had just enough left in my storage jar and thought it would look all contrast-y and good. The texture of the darker lentils tends to be more my pace because of the bite. 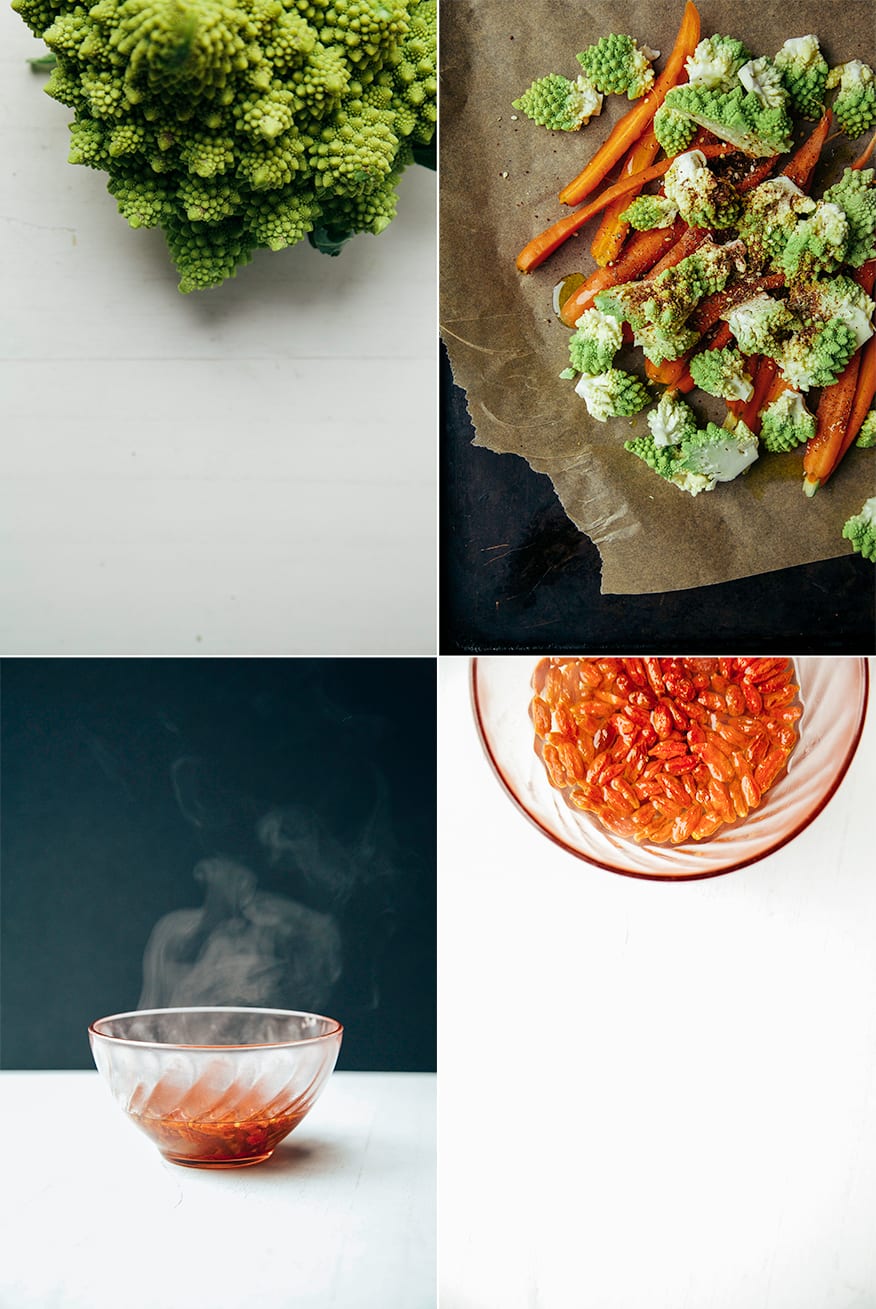 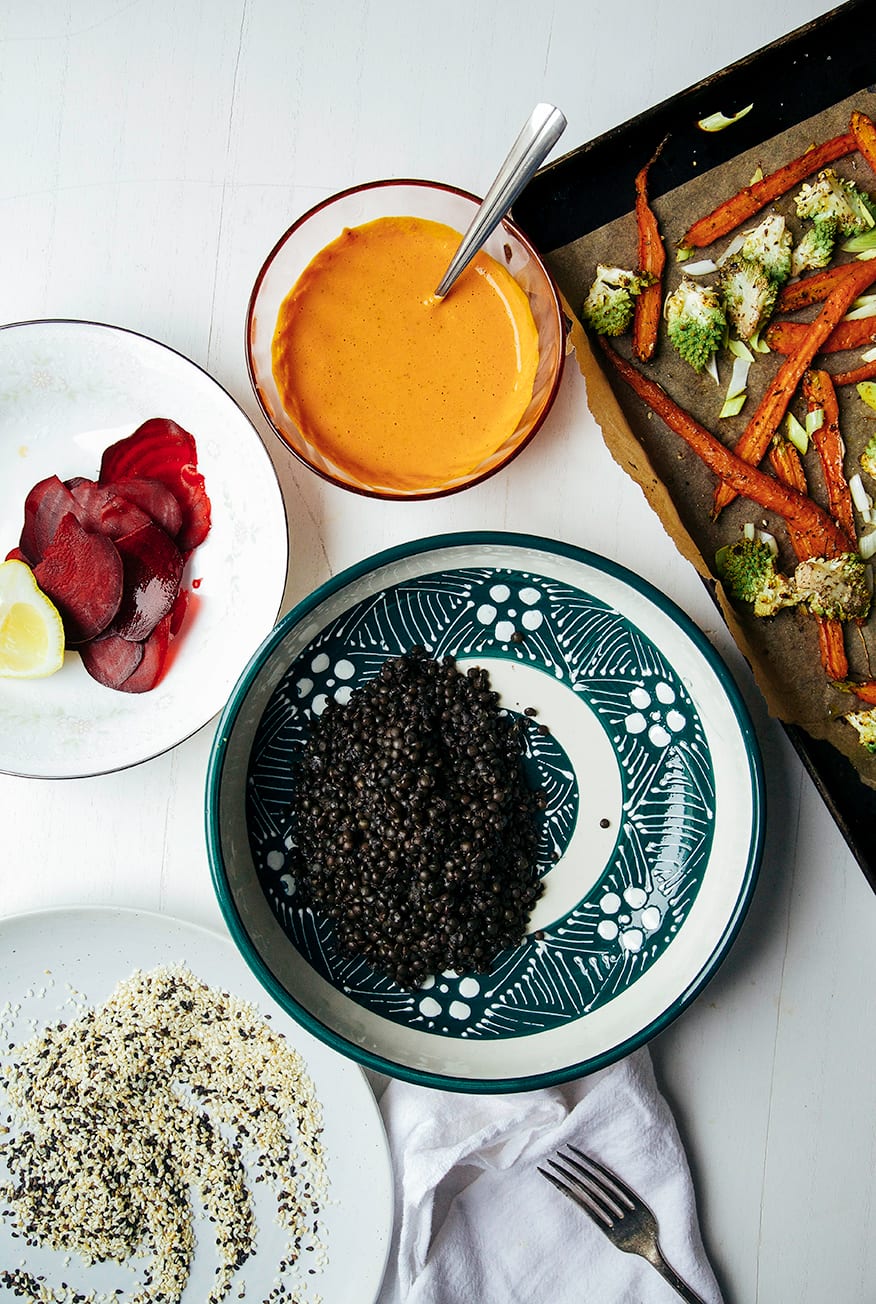 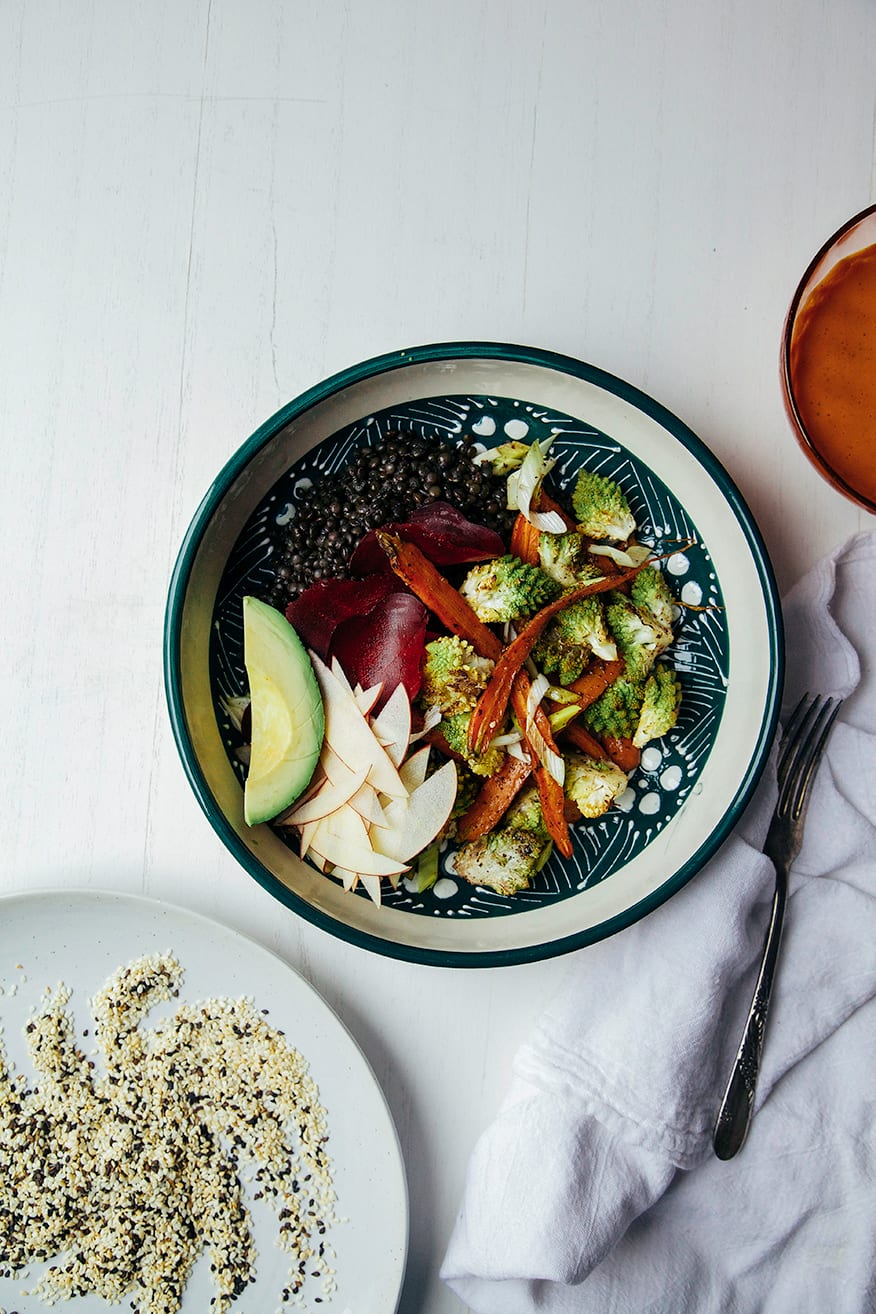 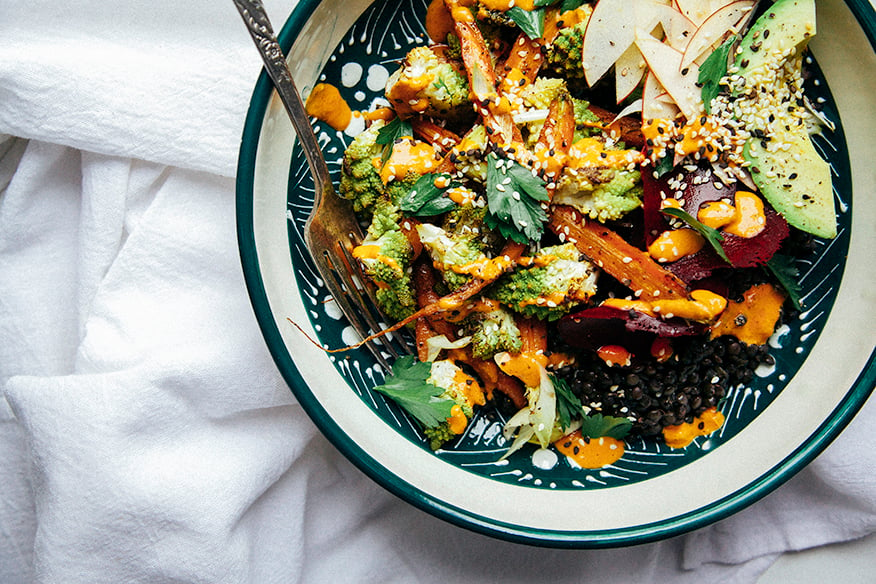 FALL VEGETABLE AND LENTIL BOWL WITH GOJI TAHINI CREAM
Print the recipe here!
SERVES: 2
NOTES: I cook lentils sort of like how I cook pasta–tons of water and then I just drain when they’re done. Also, any fall vegetables you like would be fine here. After I finished these photos, I added a scoop of cooked quinoa to my bowl and it was extra nice.

Preheat the oven to 400 degrees F. Line a baking sheet with parchment paper and set aside.

Bring a medium pot of water to a boil. Add the lentils to the water and simmer until just tender, about 25-30 minutes. Drain the lentils and then scrape them into a bowl. Drizzle them with a bit of olive oil and season with salt and pepper. Toss to mix and set aside.

Place romanesco florets, carrots, the tablespoon of olive oil, za’atar, salt + pepper on the lined baking sheet. Toss it all to coat and slide into the oven. Roast until you start to see brown edges on the romanesco, about 15 minutes. Slice the leek down the middle lengthwise and then slice the halves into half moons. Remove the tray of veg from the oven and carefully toss the leeks in the mix. Slide the tray back into the oven for 5 more minutes.

While the veg is cooking, make the goji cream. Place the goji berries in a medium bowl and cover them with boiling water. Let them sit a couple minutes to soften. Then, drain the gojis and toss them into a blender. To this, add the apple cider vinegar, lemon juice, salt + pepper, tahini, ginger, maple syrup, olive oil, and filtered water. Blend until you have a creamy mixture. Taste it and see if you need more sweetness, acidity or salt. Adjust and set aside.

Divide the lentils and roasted vegetables between two bowls. Place the thin slices of beet and apple on top. Cut the avocado into wedges or dices and place on top of both bowls. Drizzle the bowls with the goji ginger cream, and garnish with some toasted sesame seeds and parsley leaves. I like an extra wedge of lemon on the side of mine too. 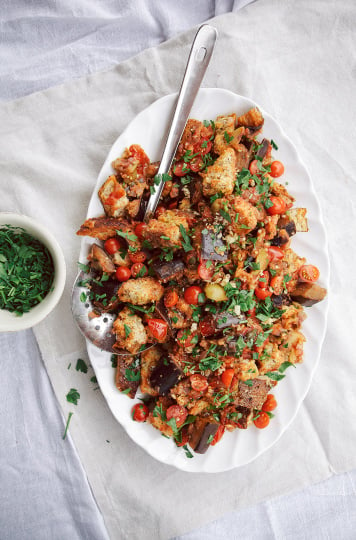 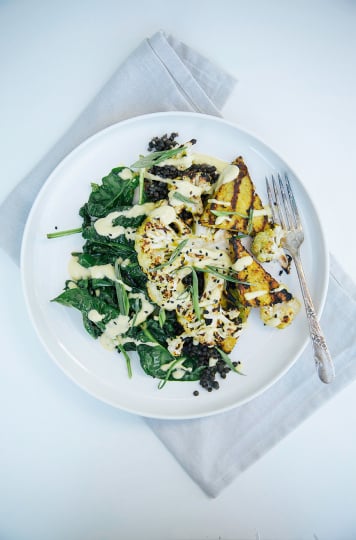