I’ve been making a lot of recipes on this site from a numbers-focused perspective lately. I try to make main course recipes because that seems to be the most popular content here, to keep the ingredient lists down, to ensure that the recipes could be made free of gluten, grains, refined sugar, moss, lichens etc. It’s a bit data-driven!

When I was working on posts over the last couple of weeks, the idea of just skipping the whole thing entered my mind. I think there’s a tendency to put a lot of pressure on yourself when you work in a creative field. There’s a constant feeling that you’re in competition with your own capability, that you have to one-up people around you and yourself.

I have a plugin for this site that helps me settle on optimal post titles, focus words, recipe descriptions etc with Google searches in mind. I read through all of the descriptions I’ve made with this thing, and thought “But that isn’t how I feel about this recipe at all!” It was a weird moment. Food is a universal language out of necessity, but it’s also highly individual because of background, economic circumstances, dietary needs, and skill level. It’s not something that can be captured by a short Google-friendly description sometimes!

I hardly ever make the same thing twice because I like to get wrapped up in the little moments of making food, and I love when those moments always feel different. When I make something for dinner that my partner likes and he says “You should put this on your site!” I shrug it off and try to explain that the dish has too many steps, it’s too simple, too many weird ingredients, it’s not an interesting flavour profile, it’s not a hearty vegan main course that’s ready in 17.5 minutes!

Fans of these may also like my Buckwheat Coconut Waffles with Cocoa. 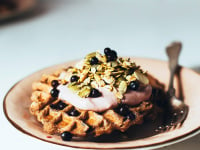